In commemoration of Real 60th anniversary, this DC3 depicts Real Transportes Aereos painting as it was in the late forties / early fifties. Textures only, to be used with the default DC-3. By Luiz Alvarenga. 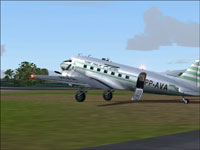 Screenshot of Aereos Douglas DC-3 on the ground.

Born in December of 1945, as many other airlines of that time - with WWII C-47/DC-3's - Real Transportes Aereos started flying between S.Paulo and Rio de Janeiro. In 1950 with a fleet of 25 DC-3's Real flew to 30 cities in five states of Brazil.

With a policy of low fares, Real quickly grew in the Brazilian market and started to acquire other companies and their national and international lines. In this way Wright, Transcontinental, Aerovias-Brasil and Nacional were incorporated in the Real consortium. By 1956 Real flew to all brazilian states, South America and the USA - main national routes being covered by Convairs 340 and 440. By the end of the decade Real's fleet had reached a total of 100 airplanes and became one of the ten world biggest airlines in number of transported passengers.

In 1958 three Super H Constellations were put into operation in international routes to Latin America and the United States. The longest route ever was introduced in 1960 to Tokio, Japan just a year before Real was bought by Varig.

Due to the original DC-3 model limitations some adaptations were made, like having registration sufix (AVA) on both wings, upper and lower sides. A special thanks to Mark Beaumont for his DC-3 Repaint Templates which were used to create this textures.

[fltsim.x]
title=Douglas DC-3 Real (Early days)
sim=douglas_dc3
model=
panel=
sound=
texture=real
kb_checklists=Douglas_DC3_check
kb_reference=Douglas_DC3_ref
atc_id=
ui_manufacturer=Douglas
ui_type=DC-3
ui_variation="Real Early Days"
description="The Douglas DC-3 revolutionized air transportation and airline service during the 1930s and 1940s. It was a luxury airliner that boasted cabin heat and running water in its on-board lavatory. With the right balance of efficiency, range, speed, and payload, the DC-3 was the first aircraft to earn a profit for its owners just by carrying passengers. The hero of early airlines, a handful of DC-3s are still at work today."\nPainted by Luiz Alvarenga
visual_damage=1

The archive dc3real.zip has 17 files and directories contained within it.