The 'Have Blue' program was built in the legendary 'Building 82' where the A-12 and U-2 were built earlier. Early on November 16th, 1976 'Have Blue' 1001 was loaded into a C-5A Galaxy and flown out of Burbank to the highly secret Test Facility near Groom Lake, called Area 51.

On December 1st, 1977, Skunkworks test pilot Bill Park climbed into the Have Blue prototype with the designation 'HB1001' and took it on its maiden flight out of Area 51.

This is a modified version of Craig Richardson's F117 Nighthawk for Flight Simulator X, painted in the first Have Blue camo paint scheme. Includes pictures and history.

This is a complete aircraft and new panel modified by Mark Rooks/RDG Aircraft.

The archive rdghb.zip has 36 files and directories contained within it.

Having never had the pleasure of coming across this aircraft in a simulator before, I felt it was only right to give a real legend of the aviation circuit a bit of time and commitment. The old ‘Have Blue’ program is one of those legendary aviation programs that captured the eye back in the day, and eventually the ‘Have Blue’ 1001 aircraft was loaded into a C-5A Galaxy and flown from Burbank to the Groom Lake testing facility (or Area 51).

As a modified version of the old F117 Nighthawk that was released for FSX, this offers the Have Blue paint scheme that looks so wonderful. It also manages to fit in all of the pictures and history of the aircraft, giving me a real and genuine appreciation for the depth and history of the model.

This package comes with a total aircraft ready to kick ass and have some fun. It’s got new panels created by RDG Aircraft that offer a wonderfully easy chance of getting to grips with the rather challenging nature of the aircraft. More importantly it feels really easy to get to grips with the way that it flies and the general style of operation thanks to the new panels that are included.

I found it a bit challenging at first, sure, but no more difficult than any other FSX mod that I have had the pleasure of messing around with in recent times. If you are interested in finding out what the real picture behind such an aircraft is then I recommend downloading this.

The Have Blue color scheme is a really impressive addition that should help you thoroughly enjoy and appreciate the programs depth and detail. The work by the team on this has been really impressive and I personally would quite happily recommend it to all.

If you want to fly something a bit different to the norm then be sure to pick this up as it offers a refreshing change from what many of us will be used to. I would happily use this again and again, as it just offers something fresh – repaint or not. 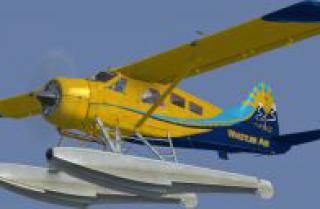