The Lockheed F-117A Nighthawk was a single seat stealth aircraft developed as a "Black Project" by the Lockheed Skunk Works. It's first flight was in 1981, and it became operational in October 1983. However, the Air Force did not reveal the aircraft to the public until November 1988. The F-117s first mission was in the US invasion of Panama in 1989.

The F-117s distinctive faceted shape allows it to have an estimated radar signature 0.025m2, far less than an ordinary aircraft. This allowed it to attack areas that are protected by radar-guided installations.

Despite many calling the F-117 a "fighter" and its "F" designation, the F-117 is actually a ground attack aircraft.

This is my first aircraft for the .org.

I would like to thank ScifiX, who helped me fix the issues with the original model. 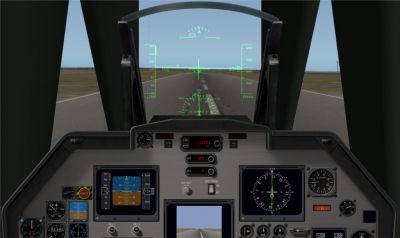 View from the cockpit of Lockheed F-117A Nighthawk on runway.

The archive Lockheed F-117A.zip has 11 files and directories contained within it.

Thank you so very much for sharing this extraordinary aircraft !!!

Screenshots look more than okay so I will try.