Royal Air Force C-130 C3 Package adapted for FSX. This is the Simshed C-130 with all gauges replaced with FSX compatible gauges in both the VC and 2d panel. Now you can fly the best freeware C-130 in your FSX. Panel updates by Dannier Garnier, Bourbon-Lancy, France. Thank you for downloading th...

File Contents
Royal Air Force C-130 C3 Package adapted for FSX. This is the Simshed C-130 with all gauges replaced with FSX compatible gauges in both the VC and 2d panel. Now you can fly the best freeware C-130 in your FSX. Panel updates by Dannier Garnier, Bourbon-Lancy, France. Thank you for downloading the SIMSHED Hercules. This is my rendition of the Royal Air Force C-130 C3. Available in Grey and Green versions.

I have a great time making this aircraft for MS FS2004 and hope you have as much fun flying it. My thanks for assistance with testing, paintwork and other assistance goes to:-

And especially to Mike Hambly for his unmistakeable Hercules sound and Clive Ryan for his suberb 2D Panel which I have adapted for use in the VC.

Controls used in this aircraft are

The Rudder and rudder pedals are deliberately locked when the aircraft is on the ground, similarly the nose wheel steering wheel is inoperative whilst the aircraft is airborne.

I may be producing other variants shortly particularly the J

Unzip this file directly into your FS2004 (FS9) folder. 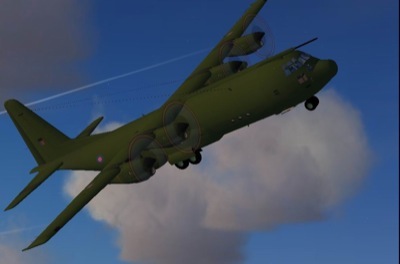 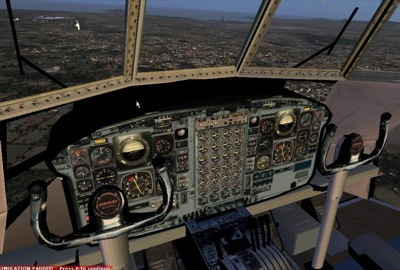 The archive simsh130.zip has 209 files and directories contained within it.

Having always been a fan of the RAF aircraft out there on the market, I was pretty excited to try this model out having been seemingly made to offer you every feature and addition you could possibly need to get a real fix on this aircraft and its potential. Given that it uses the really popular Simshed C-130 model as the basis with updated gauges for FSX for the Virtual Cockpit and the 2D panels, I knew that I was going to be using a pretty solid product. I was a big fan of the original, so this really excited me.

The updates brought in are really impressive, making the cockpit feel a whole lot more responsive than its older counterpart. It also makes it nice and simple for you to get a more modern take on the aircraft itself, given the fact that the original update came out quite a few years ago. It’s a really impressive remake in terms of the detail inside the cockpit, but I was equally impressed by the detail on the outside.

As an avid fan of the graphical side of things in any simulation that I try out, this really caught my eye. The aircraft itself is relatively simple in its design, but the model captures that simplicity perfectly. It looks brilliant, captures a really unique and charming style and also manages to fit in all of the little things that we usually would not be too bothered about seeing – from the little bumps and rivets on the aircraft model to the correct scale and placing of the wings and wheels, this really managed to adapt the right look and feel.

The original was a really impressive model in terms of the flight dynamics too, however. I was looking forward to see if the performance of the original would be up to scratch with this new updated version, especially with the extra control and strength of the new cockpit additions in FSX. Therefore, I have to say that I was not let down when I started using this! It captures those details and those extra little features just perfectly, ensuring that it provides an accurate performance that goes along with everything former pilots and historians can point to.

The work put in by the team on this project is really impressive, right up to the little addition controls like landing ramps, entrance doors and even windscreen wipers all coming on with the press of a couple of buttons. The pedals are also locked when you are on the ground, just as the nose wheel steering is more or less inactive when you are actually up in the sky.

It’s these little additions and affirmations that make the thing come to life for me, and something that I really enjoy looking at and using regularly. It feels easy to use and operates smoothly, so if you’ve always wondered what something as epic as this might bring to the table, try this out to get a good reading!

If you need some shots of inside the J, I MAY be able to get some as my old unit is converting to J's now. If so, go direct John.Schiller@gmail.com

Same as below. VC unusable due to view. Map of no use. Separate gauges do not work. Big shame.

Agreed with the above. Seperate gauges do not work. As well for when I'm in the VC cockpit a big chrome thing runs from the guage cluster to the top of the screen. Like and overstretched panel.

Separate gauges don´t work, Gps is only black box with a the small plane in center, anopther appear how a orange box Tested in FSX Steam edition .

flyawaySun, 10 Jul 2011 17:34:47 GMT
Test
test
kenliviaWed, 10 Nov 2010 23:29:57 GMT
having problems putting this download c130 into the fsx listed available aircraft section. no trouble at all placing files with 2004.where it flies like a dream. thank you for this super aircraft.
jwblackThu, 05 Aug 2010 03:47:21 GMT
It worked on FSX, VC and 2D could use some work and seperate gauges don't work, but easy install, good effects, speed brake, rear door and exits really cool and flies great. Worth the download, especially for the screenshots, thank you.