Default A321 Fixes And New Sounds. The FSX Default A321 is probably the most unpopular plane is FSX--overpowered, weird flight dynamics and a number of small bugs. This 'patch' that should have been published by Microsoft in the first place, fixes most of the bugs. The A321 flies more realistically and includes updated sounds. Original sound set by Brian Salmeron. New dynamics, additional sounds and update by "Erik O."

I found the standard FSX A321 to be way overpowered, the virtual cockpit positions were not lined up correctly and the sound was unrealistic.
I found A321 sounds for FS2004 (By Brian Salmeron) and I updated it to be fully compatible with FSX.
I moved some positions in the VC for better VC control and I updated the A321's aircraft.cfg file.
The A321 is not overpowered after this update, has a realistic takeoff length, a slight faster landing speed
(without update that could be 110 Kts, which is unrealistic) and you will find it much easier to control since acceleration is reduced.
The throttle isn't near to idle while cruising any more and the 'nose-down' effect has been reduced.
This was done by entering real-world data.

Flight dynamics changes
- The FSX A321 has been re-built. It now has v2500 engines instead of CFM-56 engines.
- The A321 is no longer overpowered as the default A321 is by adding official weights and thrust for a V2500 powered A321.
- Take-off roll longer and more realistic.
- Landing speed slightly increased according to real-world data.
- Flare on touchdown more realistic
- Lift reduced
- 'Nose-down' effect slightly reduced (it is still there when cruising below appr. FL360 mach 0.80)
- Moments of inertia adjusted
- Range is now correct and appr. 2400Nm

VC views
Moved some virtual cockpit postions. (some of them were in the wrong place)

General
Information textes changed so they correspond with the new engines.
An explenation on how to turn off flight controls for better controllability.

Remember that the A321 is not perfect yet, and probably never will be in FSX. You have to find a certain balance which is difficult to find. After almost 200 test flights I found this...
Good luck...

1 - Unzip the files into a temporary file.
2 - Copy or Cut the unpacked files except the explenation screenshots.
3 - Locate the Flight Simulator X/SimObjects/Airbus_A321 folder
4 - Delete or move the original sound folder from the A321 (moving is recommended in case you don't like the new sounds)
5 - Now copy all files into the A321 folder and overwrite aircraft.cfg.
6 - Check whether all files are in their right places or not. 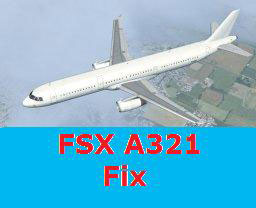 The archive a321_fix.zip has 49 files and directories contained within it.

Having grown repeatedly frustrated and annoyed with the old FSX default aircraft I’ve more or less replaced them all with new and improved versions of their old selves. One of the best mods that I have tried in recent times, though, is the A331 fixes patch for the original default.

The aircraft itself was hated by the majority of the community as being whacky and unrealistic to the way that it flew, and with this mod it does a good job of correcting these errors.

I decided to give it a try and see what I thought of the modifications.

First off, this actually gets into the air and operates like the real thing instead of the magical version that once existed. The virtual cockpit was also a major let down on the original, as were the sounds. This really does a good job of improving upon all of these features, with new and improved sounds upgrading the whole package to feel ten times better than before.

It uses the real IAE V2500 engines for a start, ensuring that it flies with dynamism and class.

Another big change, though, was the addition of the new flight dynamics. Rather than feeling like its being powered by a supernova, this is much more mild-mannered and in line with reality. The lift has been greatly reduced as has various other factors such as the nose-down effects, the moments of inertia and even the range that the aircraft runs at.

These dynamic changes fit with the new sounds well to add another layer of realism to fit with reality. Instead of being a fantasy remake of a popular aircraft, this does an absolutely exceptional job of making the whole program come together and feel the way that it should have originally.

With many information texts and tooltips also changed to give you accurate information, you would struggle to find a better remake of the original than this. Whilst it’s not the perfect rendition, it’s got the most balanced range of features that I have found in a default upgrade.

If you want to replace a thoroughly unrealistic edition of the A321 then this is a good place to start with.

Love the sounds and better flight dynamics. Still can’t hear cabin alert chimes for no smoking/seatbelt even though it mentions it in the update. Any suggestions? Other than that, I love it.

I can't find whats so good about this, i tried it, and the sounds are awful. It sounds like a vacuum cleaner now and does not have the roar. The cabin "dings" are missing and the plane is still way overpowered. A fully loaded plane can climb to 15k feet at a 3k rate with 50% engine thrust. Its crap, to be honest.

Having just downloaded A321 fix, noticed "no smoking" and seatbelt switches are defective ... smoking switch is slow and there are no sounds. Can you tell me where in the panels exactly is the autobrake switch? DLed a fix for it but can't find switch or button. Tell me if thereis a fix for these glitches. Thanks .....

Great patch! One minor issue I found is that the increased pitch MOI causes annoying oscillations in FBW mode (which I prefer not to switch off, as it differentiates this aircraft from others like the 737). Reducing it to 1600000 (similar to default B737-800, still more than the original 835131) fixes this: it may not be 100% correct, but it flies much more nicely. With that tweak, I now love flying this aircraft!