When you select the aircraft from the aircraft list you can first view the stats that dictate normal flights. Do Not exceed these stats. Print them or write them down before your first flight. This aircraft has been modified to fly as close to the real thing as possible, including the cruise altitude and IAS. Because this 747 is actually carrying another wing, and vertical stabilizer, it does not fly like a normal 747. If you exceed the limits you will run into trouble. In other words, never exceed 270 KIAS or Flight Levels above 15,000 feet. Fly low altitude airway routes to Air Force Bases only. This aircraft could fly a lot further if it could fly higher and faster, but don't try it. Everything in the dynamics area has been altered in order to create the most realistic flight characteristics possible. That includes the weight and balance, wing area, tail area, and engine ratings: all following real-world specs. Just like the real-world, it takes a long time to fly at 260 or 270 KIAS, but you will also see that the aircraft body is fairly level at these speeds from 13,000 to 15,000 feet, due to the increased wing area by adding the shuttle. Since all flights are eastward, there is usually a tail wind. Real-world flight plans for the SCA avoid any adverse weather, but this plane will fly through almost anything if you run into such a situation, mainly due to the increased wing area. Keep in mind that you have one of only three Space Shuttles as your cargo, plus four souls on board. Because I am not an aircraft designer or graphic manipulator, the Shuttle carried by this SCA is the Enterprise, which was used only during the initial test phase of the Shuttle program ... now on display at the Smithsonian's National Air and Space Museum's Steven F. Udvar-Hazy Center at Dulles International Airport. Although the model is not accurate, the weight of the Shuttle is. In fact, the weight of this SCA (N905NA) is to specs as well. 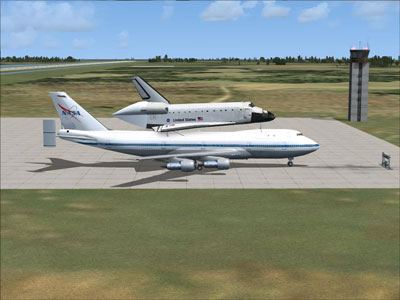 The archive f747dt.zip has 87 files and directories contained within it.