All of the Swiss airports and airbases in FSX, except for Zürich (LSZH), many of them more or less forgotten by Microsoft, were modified and supplied with (more) parking facilities Also taxiways, nightlighting, control towers and tower frequencies were added. Also a Traffic Tools generated flightplan and aircraft, to add militairy and civil AI to those airports, is included. For use with or without MyTrafficX.

I guess there was never so much discussion about a game as there is since the introduction of Microsoft FSX. Of course it is a beautiful simulator, however to much demanding of even high-end computers. All sliders to the left is not really a solution to enjoy this new sim. For instance, when setting the AI-traffic sliders at 50%, the bigger airports come alive, but framerates sink dramatically, and who likes flying with a frame-rate of less then 5, or flying alone?

Therefore I bought MyTrafficX and, after installing, I was very glad with the results, much much aircraft and, although not very detailed, with minimum frame-rate losses. Because I like VFR-flying around in Switzerland, I noticed that still many smaller airports and the bigger airbases too were completely dead. Then I noticed that all those airbases an airports in Switzerland did not have any parking facilities. Microsoft simply forgot that (I guess it's the same in other European countries).

At the same time Burhard Renk (MyTrafficX) published a work-around for modifying/updating airports with AfCAD2, using software i.e. APXshredder, X2AF2X and NewBglAnalyze (Winfried Orthmann). By working according his work-around, I was able to modify 41 Swiss FSX airports and airbases. They are included in this ZIP-file as BR2_ICAO.bgl files and you can use them with or without MyTrafficX.

Another possibility is to create flightplans, using that good old Traffic Tools and after compiling to a traffic****.bgl file, this file can be used within FSX. By doing so, you can use your own aircraft and also specify your airports. Bruno van Mulken discovered that this is possible. An explanation how to do this is given in the Installation.doc file. Also included are the Airports.txt, Aircraft.txt and Flightplans.txt, used by Traffic Tools so you could change flightplans or aircraft and then make a new compilation.

The aircraft used is, in most cases, not flown in Switzerland according the given flightplans but to me, they are my favourite airplanes. Main objective to me was: making the Swiss airports and the sky above more alive. Please realize that most of those planes are not AI-aircraft, they have detailed textures and you can fly some of them in FSX. Because I only used them for AI-traffic, I left away the panels and gauges, otherwise the planes show up in the FSX aircraft select menu and it is probably more frame-rate friendly when leaving them away. If you like the planes for flying them within FSX, you'll have to download the files from Flightsim.com.

Credits:
Thanks go to Burkhard Renk for developing MyTrafficX and other mentioned utilities and for managing a very interesting forum at www.simmarket.com.
Thanks go to Winfried Orthmann for his NewBglAnalyze.
Thanks go to Bruno van Mulken for his info how to use Traffic Tools generated flightplans with FSX.
Thanks go to Lee Swordy for his beautiful AfCAD (we're all awaitening version 3) and for Traffic Tools.
Thanks go to all developers of those beatiful aircraft and textures that was used by me and packed into this Zip file. There are so many developers that it was impossible for me to ask everyone personally permission without probably having forgotten someone. I hope they will understand that I used their creations without any commercial purposes.

The author of this package is in no way liable for any damage it may cause from incorrect use (however unlikely that it may be).
Henk Altena 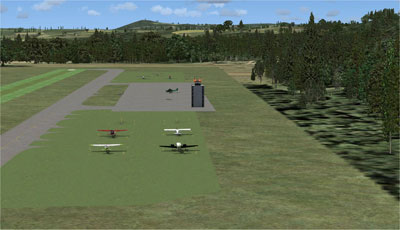 The archive swiss_ai.zip has 11 files and directories contained within it.

FSX crashes when I try to fly in Switzerland... HELP, please