Jet2.com Boeing 767-300ER RR. Jet2.com is a low-cost airline based in Leeds/Bradford England, est. 2002. It serves domestic and other European destinations. It is rumored that the airline will soon take delivery of a B767-300 to commence long haul routes such as Florida and the Caribbean. Jet2.co...

Jet2.com Boeing 767-300ER RR. Jet2.com is a low-cost airline based in Leeds/Bradford England, est. 2002. It serves domestic and other European destinations. It is rumored that the airline will soon take delivery of a B767-300 to commence long haul routes such as Florida and the Caribbean. Jet2.com operate hubs at Manchester, Belfast International, Blackpool International, Edinburgh, Newcastle Airport and East Midlands. Repaint is by Ben Thomson and the model is the original Project Open Sky 767-300ER with full animations and features. These textures are in 32 bit. Created for FSX but works with FS2004.

-------------
Background
-------------
Jet2.com is a low-cost airline based in Leeds/Bradford England, est. 2002. It serves domestic and other European destinations. It is rumoured that the airline will soon take delivery of a 767-300 to commence long haul routes such as Florida and The Caribbean. Jet2.com operate hubs at Manchester, Belfast International, Blackpool International, Edinburgh, Newcastle Airport and East Midlands.

--------
Credits:
--------
Project Opensky and its talented people for the B767-300 model and paint kit,
Martin Wright for the indispensable DXTBMP utility program,

Copyrights:
This aircraft is made by Project Open Sky.

- the 767 GE engines are mounted 6 inches
further forward than the Rolls Royce or Pratt and
Witney engines?

- Did you know the engine fan sizes, diameters, bypass ratios
and number of stages are different amoung the 767 engine types?

- Did you know the nose gear and main landing gear tires
are different sizes?

- Did you know the 767-400 has larger diameter wheels and tires,
has different main landing gear, sits higher off the ground?

- Did you know max rated N1 speeds is different for each
engine type used on the 767?


- Did you know that thrust reversers are very ineffective? 80% of the
stopping power actually comes from the wheel brakes.

- Did you know that in a 767 with CF6-80A engines, when the engines are shut
down, externally you often hear the GPU or APU providing power to your aircraft.

On engine start, internally you hear the rumble of the engine, but very little
scream due to the sound dampening of the airframe. Externally, you will hear
the fans start to spin, then you'd hear the injectors, and eventual combustion
as the engine starts.

At different dampening levels for internally vs. externally,
20 - 24%N1 N1, internally you hear almost nothing, but low rumble. You hear the aluminum flexing,
plastic bins rattling, and bumps and thumps from the pavement sections and runway lights --
you should be able to hear and feel these low frequency vibrations (make sure you use a subwoofer).
As you thrust up to about 30 - 40% N1, you begin to hear a "sheering' noise as the engine
whines, at 40 - 60%N1, you begine to hear a "shuuuuwaaaaaaa" wispy sound as the engines
gather strength. By 60 - 66%N1, you hear the SHUUWAAA become lowered as your aircraft
slowly begins to creep forward gathering speed. The shift from 66%N1 to 80 - 88%N1 is quite
dramatic, the engine spooling quickly, the sound changing to a deep GRIINNNDDDDDD as those
large fans spin and produce both thrust and electical power. As you thunder down the runway, you hear
more pavement sounds, thumping internally, loud banging from runway sections and runway lights.
The aluminium is really flexing now as this aircraft's engines, which were completely cold only
10 minutes ago, are now giving you all they've got. You start to hear the packs' hiss grow louder
during pressurization. By 100%N1 or higher, the full power of the engines is GRIINNNDDDING at you now,
externally, you can hear the loud SHUUAAAH and GRINDING give way to a deep rumbling from full on thrust
and combustion. You should feel the FULL POWER of this aircraft, feeling frailty of the
human body, feeling that this much mass would be very difficult, if not almost impossible
to stop, if there was an emergency or rejected takoff. The banging and rattling reach a high
level until you are off the ground. although With the engines now GRINDING, you feel the air is smooth as
silk.

As you level off to cruise, you hear more of the packs than of the engines -- remember
they are more than 60 ft behind you, sound dampened by the rest of the fuselage.
As you reach your cruising altitude, You hear the pack
presurization increase as you increase speed and altitude,
beging steady as you level off.

On decent, you hear nothing but the packs as engine thrust is reduced, the autopilot or yourself
holding the thottles back to reduce speed. On landing, you heard the reverse of sounds as you approach
the runway. Particularly, you should hear the SHUUUWWAAHHHH often here as the autopilot or throttles
spool the engines faster or slower. This is a very noticable trait as you can feel the winds and
pressure shifting, and the engines adjusting. As you deploy the flaps, from the flight compartment,
you should be able to hear the flaps "click CLACK" into the bauks. You will hear a low-frequency runble,
ver faint, as the air now rushes over the deployed flaps. This continues as you go through the
flap angles. As the gear comes down, you hear hte gear level click, then suddenly the rush of air.
It feels and sounds like a part has just fallen off the airplane as the nose gear opens.
In the flight compartment, your feet actually get COLD from the outside air.

On touchdown, as the main gear strike the ground, you should hear some noise but faint
(unless you land REALLY REALLY HARD_. You can feel the vibration and hear the sounds.
Not wheels touching down or screeching, but rumbling and vibrations resonating throughout the
airframe. Now you hear the autospoiler WHIIRRRR and deploy. You engage reversse thrust and hear
them roar. Externally, you don't hear flaps deploying, spoiler mechanism or really rubber touching
down. Internally you would hear the THUMP RUMBLE of the gear, externally if your REALLY REALLY
(read dangrously and not reasonably close) you would hear tires screeching.

As you slow, finally the nose gear comes down and VIOLENTLY strike the runway. This
should feel and sound so violent, it should feel to you like the strut is about to
push its way right up into the fuselage, boucing, crushing, ripping it's way upwards into
the air frame. You should hear the runway bumps really THUMP THUMP THUMPING now as you hear
the pitch of the turning wheels begin to slow.

You turn off onto the taxiway.

These are what the real things sound like from the pilot's perspective and on the tarmac. 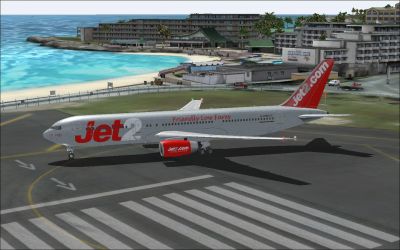 The archive projectopensky767-300erjet2com.zip has 53 files and directories contained within it. 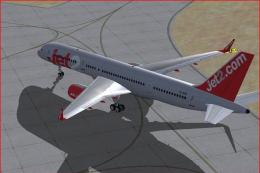 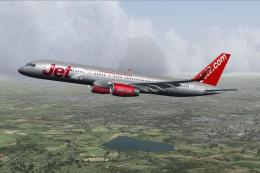 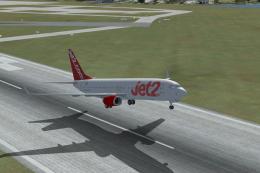 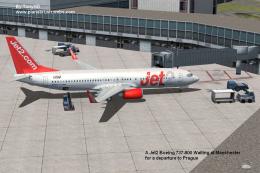 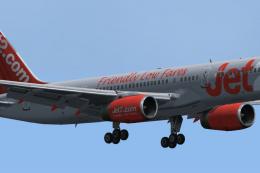 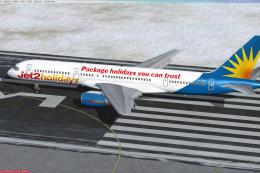 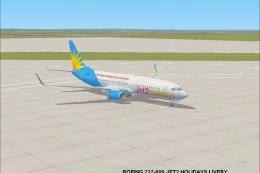 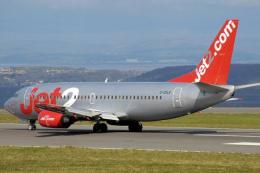 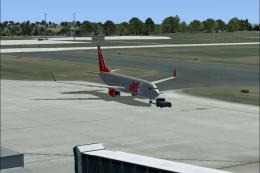 No Sound at all, CFG says it uses default 737-800 sound all other aircraft using the same are ok?