Swissair Airbus A340-600. The FSX A340-600 in the fictional livery of the old Swissair. It has been for almost 71 years a Swiss national symbol before bankruptcy in 2002, when the successor Swiss International Airlines was founded from former Crossair, which acquired assets and the most recent ai...

Swissair Airbus A340-600. The FSX A340-600 in the fictional livery of the old Swissair. It has been for almost 71 years a Swiss national symbol before bankruptcy in 2002, when the successor Swiss International Airlines was founded from former Crossair, which acquired assets and the most recent aircraft of the fleet. There were nine orders for the A340-600 by Swissair, but these were canceled by Swiss International Airlines in favor of the smaller A340-300, the aircraft which actually use the registration HB-JMA. Textures only for the Thomas Ruth A340-600; it requires TOMA346.ZIP. repaint by Mario Monfrecola.

"How to install" instructions:

-Unzip the texture.HB-JMA folder in the Tom_A340-600 folder
-Copy and paste the following lines in the Tom_A340-600 aircraft.cfg file
(if you are using windows vista or seven disable the user account control from the control panel to modify .cfg files in FSX)
-You must have the base package TomA346.zip installed as described in Thomas Ruth original manual with the original Airbus livery still installed(it must not be deleted) because this file uses the texture.cfg to alias all
common textures(bump maps, specular maps and other aircraft components), so if you have deleted one of them this livery won't work properly, it won't show up or it will load just the skin textures of the plane
-These textures,likewise the model itself are not tested in DirectX 10 preview mode(this option is avalaible in FSX with most recent graphics cards,after nvidia Geforce 8xxx series or ATI equivalent), so if you want them to work you have to disable it, and you must have at least SP1 installed...the aircraft is tested in FSX plus SP1 and SP2 installed.

The archive a346swissair.zip has 12 files and directories contained within it. 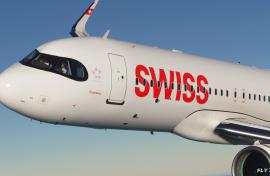 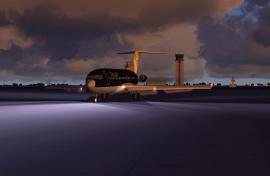