Thomson Airways Boeing 757-200W RR. Thomson Airways is the largest charter airline in the world. Operating from 22 airports in the U.K. to holiday destinations in Europe, North/South America, Africa, Asia and the Caribbean. This is a repaint in the new livery which has a darker blue on the fuselage and tail, and drops the 'fly.com' from the logo (based on the repaint of First Choice Airways 757 G-OOBA). Repaint is by Ben Thomson and the model is the original Project Open Sky B757-200 with full animations and features. These textures are in 32 bit. Created for FSX but works with FS2004, see readme.

--------
Credits:
--------
Project Opensky and its talented people for the B757-200 model and paint kit,
Martin Wright for the indispensable DXTBMP utility program, 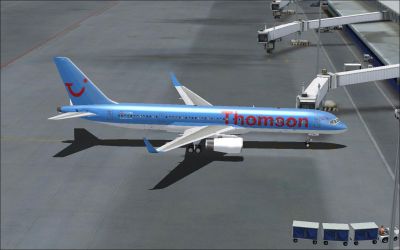 The archive tom_fca757w.zip has 85 files and directories contained within it.

Great model but cant get sound to work.Please help many thanks.