I.C.P. Savannah UltraLight (file version 3.7.1). The ICP Savannah is one of the top selling ultralights in Europe. It is dependable and easy to fly. Its STOL performance makes it easy to operate from any airfield. The Savannah is also a very good airplane for cross-country flights during which on...

I.C.P. Savannah UltraLight (file version 3.7.1). The ICP Savannah is one of the top selling ultralights in Europe. It is dependable and easy to fly. Its STOL performance makes it easy to operate from any airfield. The Savannah is also a very good airplane for cross-country flights during which one can appreciate its great stability. Full package includes aircraft, textures and panel by Massimo Taccoli. FD files by Dennis Seeley. Gauges by Dennis Seeley and Massimo Taccoli Sounds modified from original by Mike Hambly. Repaints of C-ITAA, CDN, C-IPEE by Bob Azzaro.

Please note: This version fully replace the former version 3.5. To avoid problems is strongly adivised to remove it before installing the new one. this new version solve problems of visualization with the propeller disk and also modified the contact points for a better and more realistic attitude of the plane when seating on the runway.

The ICP Savannah is one of the top selling ultralights in Europe. It is dependable and easy to fly. Its STOL performance makes it easy to operate from any airfield. The Savannah is also a very good airplane for cross-country flights during which one can appreciate its great stability.

This model is an update of Version 3.0. In this version have been completely revised the 2D panel the 3D panel,with changed layout of gauges reflecting that of real panels and textures. Problems arosed with the release of the FSX SP2 version regard the gauges appearing to be surrounded by reflective or transparent frames has been solved.

The package contains two models, one with wheel pants and one without, and two texture sets, Italian and Canadian.

Model has working VC panel and can be flight from Virtual Cockpit only.Picture contained in the documents/$readme folder shows the panel in the new layout.

Technical and performance data obtained from the official site of the manufacturer.

Good flying to you all.

1) extract the here provided Sav35fsx.zip file in a temporary folder. After extraction You'll find the Savannah_3.5 folder, and this text.

2) copy or move the Savannah_3.5 folder into your airplane folder of Microsoft Flight SimulatorX.

3)Then launch FSX and you'll find two Savannah models one with wheel covers and the other without with their respective thumbnails listed in the Select aircraft window of the Free flight menu under ICP Italy as aircraft manufacturer.

5) double check everything before e-mailing me! the most of problems I am asked to solve are due to not having read readme files!!

Paint Kit (base textures) in layered Photoshop format (*.psd) for the Savannah model by Massimo Taccoli. Requires ICP_Savannah.zip for fs2004 and Sav35fsx.zip for fsx.

The files are in layered Photoshop format (*.psd).

You must have a program to edit the psd files, like Photoshop or Paint Shop Pro, and a utility that can convert the files to extended bitmap format (DXT3) such as DxtBmp by Martin Wright.

I assume you already know how to paint FS models, so no tutorial is included here. Tom Gibson has a tutorial at his website, www.calclassic.com, explaining how to use paintkits like this. 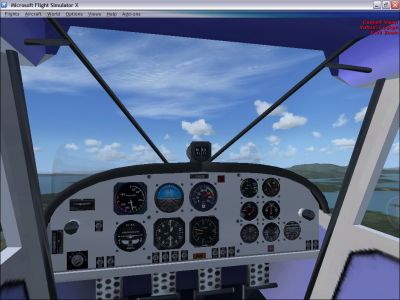 View from the cockpit of I.C.P. Savannah UltraLight.

The archive savannah_371.zip has 208 files and directories contained within it.