F-16D Demo Team NL 2009. Repaint for the IRIS F-16D in the colors of the 2009 RNLAF F-16 demo team. This awesome paint did not make it in time for the release of the aircraft, but is a must for every show pilot! You must own a legal copy of the IRIS F-16D to use these files. The paint was done with the upcoming paint kit by Michael Haegele, Triplesix Design Studio.

I'd like to thank the Royal Netherlands Airforce's F-16 Demo Team for letting me publish a paint scheme depicting their truly beautiful jet!

The paint was done with the upcoming paintkit.

You must own a legal copy of the IRIS F-16D to use these files.

C) Open the aircraft.cfg file (in the 'IRIS F-16D Fighting Falcon CL' folder) and paste the following after the last number in your entry. Replace the XX with the respective next higher number:

That's it! And now go flying! I hope you have as much fun with this magnificent paint as I have! 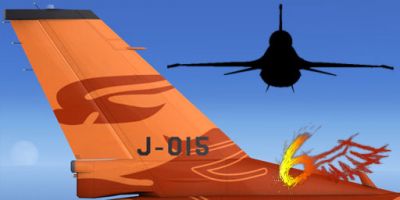 The archive 666-f16d-demonl.zip has 14 files and directories contained within it.