Douglas AD-4N Gabon 1980. A repaint of Tim Conrad's A-1H Skyraider (A-1HSYRAIDER_NAVY.ZIP) in the markings of the Gabonese Presidential Guard as seen in 1980. Installation procedure is slightly non-standard, so please take the time of having a look at the ReadMe.txt. Repaint by Michel Gerard.

Douglas AD-4N Gabon 1980. A repaint of Tim Conrad's A-1H Skyraider (A-1HSYRAIDER_NAVY.ZIP) in the markings of the Gabonese Presidential Guard as seen in 1980. Installation procedure is slightly non-standard, so please take the time of having a look at the ReadMe.txt. Repaint by Michel Gerard. 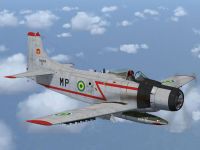 Eight Skyraiders were presented by France to Gabon after they had been withdrawn from French Air Force service.

Although this repaint can be installed in the usual manner (i.e. creating a new texture subfolder in your A-1H folder and then modifying the aircraft.cfg accordingly), this method is not recommended unless you have some knowledge of the way an aircraft.cfg is written.
French Skyraiders were of the AD-4 and AD-4N/NA variants. AD-4s had the airbrakes locked in the closed position and AD-4N/NAs had no airbrakes at all, quite obviously. For this reason and in order to avoid an unwelcome operation of the airbrakes it is better to create a new AD-4 folder in your Microsoft Flight Simulator X\SimObjects\Airplanes directory. Paste and copy in this newly created AD-4 folder the contents of the A-1H folder minus the “texture” subfolders; then extract the contents of this archive with the "AD-4" path to the Microsoft Flight Simulator X\SimObjects\Airplanes directory, overwriting when prompted. This will install the necessary textures together with a slightly modified aircraft.cfg in which the airbrakes are in a fixed closed position.

In case you previously installed some other of my French Skyraider repaints you already should have the new AD-4 folder and the modified aircraft.cfg in it, so do NOT overwrite the aircraft.cfg but simply add the following text in this aircraft.cfg, not forgetting to change [fltsim.XX] for the next number in sequence:

The original aircraft by Tim Conrad depicts an A-1H (which until the change of designation in 1962 was called an AD-6) whilst French machines, acquired prior to the change in designation, were ex-US Navy AD-4s. There are some subtle external differences between those variants.

Moreover, the Skyraiders acquired by the French Air Force were modified upon arrival in France. Most naval equipment, including the arresting gear, was removed although the wing folding mechanism was retained. The complete radio equipment was changed to French standards, hence a quite different antenna array. The ARN-6 ADF fairing was moved to the fuselage undersides, a large crescent-shaped antenna for the VHF TRAP-3A transmitter was fitted on the fuselage spine, and so on…

The inner wing weapon pylons were of a quite different shape too. On French machines those pylons were usually painted olive drab but I have left them natural metal so as to make the difference less conspicuous.

Regarding ordnance, please note that only the centre line drop tank should be displayed on a French machine. All other underwing stores (such as ZUNI rocket pods, 250 lb bombs and the like) are either irrelevant or in a wrong position. Typical warload for a French Spad in Algeria would consist of either 500 lb or 1000 lbs bombs (or sometimes napalm canisters) on the inboard wing pylons and single (US 5 inch HVAR) or paired (French 105 mm T.10) rockets on the 2x6 outboard pylons; add to this the 4x200 20 mm rounds of the M3 guns, the Skyraider definitely boasted an outstanding firepower.

The centre line drop tank was almost exclusively used for ferry missions, which probably accounts for the fact that most of those drop tanks had retained their original Navy Blue colour. Usual payload for a ferry mission was one Mk. 8 (300 US Gal) tank on the centre line and two Mk. 12s (150 US Gal) on the inboard wing pylons.

Exhaust stains differed considerably from one aircraft to the other, and depending on how often the engineers took the trouble of cleaning them too!

This repaint would not have been possible without the very comprehensive paint kit supplied by Tim Conrad. Many thanks to him.

Many thanks to Frank Safranek too, whose advices have been precious as they always are. 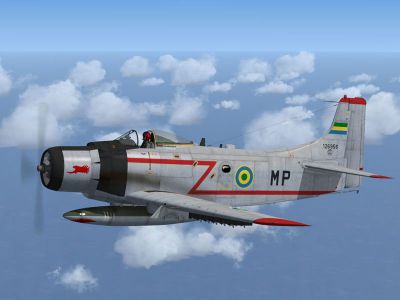 The archive ad-4n_tr-kmp.zip has 28 files and directories contained within it.