All new FS2004 model of the OV-10D twin turboprop FAC/COIN aircraft, designed in late '60's for USAF, and also USMC and Navy. Readily recognizable by its large canopy, twin tailbooms with high set tailplanes, and angled sponsons able to carry a range of ordnance. Also used by Morocco, Thailand, Columbia, Indonesia, Venezuela, and the Philippines. This all new model has full animations, including spoiler plates, cargo hatch, slotted flaps, canopy doors and steps, and VC.

3) Copy the ov10a.cab, and ov-10d.cab gauge files over to your FS2004 Gauges folder. Copy any effects files to the sim's effects folder.

4) During this installation, you may be asked to overwrite some files. This may be due to you already having some of my planes installed. Overwrite or not, choice is yours.

5) Double check everything before e-mailing me! 99% of problems can be solved this way:-) Since you are reading this, you are way ahead of the dimwits who don't bother to read readme files!:-p

NOTAMS:
The OV-10D has a slightly different panel, but most of the gauges are the same, or at least give the same info.
The beacons on the A models were replaced by strobes on the D models, so this version has a strobe light switch in place of the older beacon switch.

This model is an all-new FS2004 creation. If you happen to have my older version, trash it!:-)

In the aircraft selection menu, look under North American Rockwell

OV-10's have a smoke generator via the left exhaust, which, simply enough, can be activated in FS9 with the smoke key (default key i)

OV-10's have spoiler plates that work with the ailerons for roll control. They cannot be deployed like normal speedbrakes, so plan your descents properly!

See the attached pics for which VC switches work.

KNOWN BUGS:
The start switches in the VC don't work properly (don't know why?), but the 2-d pop-up start switches will work. Or you can just use CTL e (auto-start).

To all who download and enjoy my planes:-)
And to all of the makers of all the tutorials, utilities, tips, etc. Couldn't do it without you!!

This version of the Bronco is updated for FSX. Please note in the readme.txt that the information that was mentioned by Tim Piglet Conrad for FS2004 applies the same in FSX. The changes in the aircraft and panel are:

1) A thumbnail is added to the Texture folder so that the plane will show in the Aircraft Select Menu in FSX.

2) A reference.htm is added to explain the HUD. It is accessed by the Kneeboard Icon then clicking on "Reference".

4) A gunsight is added to the 2d panel. It is accessed by the "GS" Icon. It is not in the VC. No way to include it in the VC was found.

5) Camera definitions for the tail, right and left views are added.

6) An autopilot is added to the 2d panel only. No way to include it in the VC was found.

7) It is now called Marine 114. The Bronco callout is not included in the default FSX ATC list. It could be added with EditVoicepack if desired by the user.

8) OPTIONAL: One thing you might want to do while the aircraft.cfg is open is find the section titled:

and look for the following line:

This number was changed this number to 5.00 to help lower the excessively nose-high attitude this aircraft has during landing.

9) To have the callsign for the Marine and for the CAPFlight spoken, download editvoicepackx v 4.0 and CAPFLIGHT Callsign. Open Editvoicepack X and click File/import. Click on the .vcpmod file and open. Hit save, then import. Now you can select CAPFlight from the aircraft's Description menu in FSX.

Credit is given to Tim Piglet Conrad who originally designed and uploaded the GREAT basic aircraft and panel. The original file was OV-10D.zip. He has given permission, in writing, to update the OV-10D for FSX and add the HUD and gunsight.

Credit is given to Dietmar Loleit who designed and uploaded the GENHUD gauge to Avisim. He has given permission, in writing, to use his HUD in this update.

Credit is given to David "Opa" Marshall who helped with formatting the reference.htm.

Credit is given to Ken Glaze and John Detrick for their repaints.

The panel changes, camera definitions, and other changes, were made by Bob Familton. The installer and added/updated textures and testing were made by Shane Reilly.

These changes shouldn't harm your computer, but we accept no responsability for their use and effect. The update shall not be posted anywhere else and shall not be used in any shareware or payware product. It is strictly freeware.

The model and panel are not to be modified in any way without the written permission of Tim 'Piglet' Conrad first, then Shane Reilly.

There will be NO posting to websites other than Flightsim.com and Sim-outhouse.com without the written and granted permission from Tim 'Piglet' Conrad and Shane Reilly. 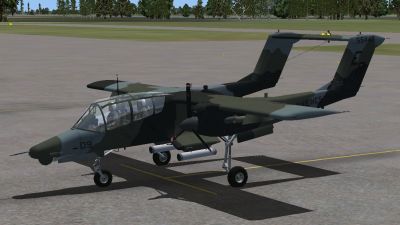 The archive ov10dfsx.zip has 9 files and directories contained within it.