Brazilian Air Force Airbus A319-133X CJ. The main presidential aircraft currently used to transport the President of Brazil is a modified version of the Airbus A319, with tail number 2101. It was designated by the Brazilian Air Force as VC-1A, and officially christened as the "Santos-Dumont", after the Brazilian aviation pioneer. It is used to transport the President on all medium and long-range international flights. By Marco Fischbach.

*testet with SP2 only.

-> DO NOT DUPLICATE THIS FILE BY UPLOADING IT SOMEWHERE, REPAINTING OR IN ANY OTHER WAY WITHOUT MY EXPLICIT PERMISSION!!! 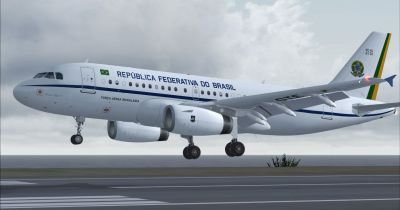 The archive fsx_pa319_federative_republicof_brazil.zip has 61 files and directories contained within it.

Everytinhg is working well! Congratulations all of you! Tudo esta funcionando bem! Parabens a todos voces!