(SP2) Acceleration Lockheed T-33A T-Bird. A variant of Lockheed's F80 Shooting Star, the T-33A has been the most widely used tandem two-seat advanced trainer in the world. It has been supplied to the air arms of some twenty-five countries, and built under licence in Japan by Kawasaki (210 machine...

(SP2) Acceleration Lockheed T-33A T-Bird. A variant of Lockheed's F80 Shooting Star, the T-33A has been the most widely used tandem two-seat advanced trainer in the world. It has been supplied to the air arms of some twenty-five countries, and built under licence in Japan by Kawasaki (210 machines) and in Canada by Canadair as the CL-30 Silver Star (T-33AN) (656 examples). The parent company had manufactured a total of 5691 T-33A and T-33B trainers when the last was delivered in August 1959, the latter being a version for the U.S. Navy.The prototype flew for the first time on March 22, 1948. Full package includes aircraft, textures and panel by Massimo Taccoli. FD files by Dennis Seeley. Gauges by Dennis Seeley and Massimo Taccoli. (See also FIX_FOR_T-33A_FS9_FSX.ZIP).

This is a completely new model with three different liveries for italian examples, nothing to do with my older model for Fs2000/fs2002.A paintkit will be available soon.

To install model into FSX follow this simple procedure:

1) extract the here provided zip file in a temporary folder. After extraction You'll find a folder , T-33A T-Bird, and this text file.

3)Then launch FSX and you'll find the T-33A model listed with its thumbnails in the Select aircraft window of the Free flight menu under Lockeed Aircraft as Aircraft manufacturer.

5) double check everything before e-mailing me! the most of problems I am asked to solve are due to not having carefully read the readme file!!

The FS model, made with FSDS 3.51 has many moving parts: flaps, ailerons, rudder, elevator, steerable nose wheel, rotating wheels with suspension, opening canopy, air brakes, auxiliary engine intakes, available when the model is on the runway, which close when retracts the landing gear. It also has a detailed interior with pilots with animated head which seems to explore what happens around him. Two auxiliary engine intakes above rear fuselage are normally opened and close only when the the undercarriage retracts.

The virtual cockpit canopy has available instruments panels for both front and rear seat.

The 2d panel host all necessary gauges to fly this plane, arranged almost like the real aircraft , flight simulator permitting. The model can be flown also from the 3D virtual cockpit either front or rear seat.
Gauges used in the panel are all made by Dennis Seeley except for only some like the radio.cab.

This is FREEWARE. These files are strictly for your own personal, non-commercial use. Any redistribution, repackaging or reselling of these files in any form is expressedly prohibited without my written permission. 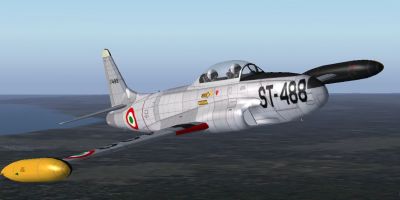 The archive t-33a_fsx.zip has 67 files and directories contained within it.