Some of the changes include:

1. Airline assignments at the new Terminals A and B and the off-gate commuter ramps at Terminal A per the official Website.
2. While the gate numbers and number of gates per Terminal are accurate, emphasis at ELLX was on Terminal assignments and not gate assignments.
3. AI parking sizes optimized for the MTX 5.2a schedule.
4. ALL Airport Scenery now shows at the normal scenery density level.
5. All Runway markings, lights and approach equipment and lighting per airport specifications.
6. Addition of the newly completed Terminal A with 5 gates with jetways - 13 off-gate ramps at Terminal A as well.
7. Additional vehicle paths and fuel trucks added to facilitate more effective AI service.
8. General Aviation ramp areas enhanced for additional GA including the Bombardier Challenger sized GA.
9. Enhanced Luxair Cargo Center with eight Z parking ramps per the official Website.
10. Abandoned Taxiway D and newly constructed Taxiways D1 and D2 per charts and satellite images.
11. Reworked some landclass in and around the airport.
12. Updated and revised ILS and NDB approaches with transitions and holds for Rwy 6-24. and
13. Corrected Tower view altitude with red light beacon added to control tower during dusk/dawn and night.

All airport buildings and objects can now be seen at normal scenery level. jetways begin to appear at the dense scenery level - very dense will reveal all jetways.

Note: Airport spot lighting guides have been added. however, to see the lighting you must install fsx_lts by Jim Dhaenens.

Installation: Place all bgl files in a scenery folder of your choice - don't forget to activate the scenery in FSX. One location could be the Microsoft Flight Simulator X\Addon Scenery\Scenery folder. However, the ELLX scenery should be at a higher scenery priority from that of "other" area scenery including UTX Europe and any local or state scenery. Disable or remove the existing MyTraffic X BR2_ELLX.bgl file located in the MyTraffic X scenery folder.

I have tested ELLX using FSX sp2, and while I don't anticipate issues with using the earlier versions (RTM and SP1), I cannot guarantee that the visuals will look the same on every setup. While not needed for the scenery to work, I also tested to ensure that ELLX works with UTX Europe, Scenery Tech Europe, and FS Genesis Europe Mesh.

ELLX was tested with and optimized for MyTraffic X 5.2a and WOAI. Airline assignments at the new Terminal A and Terminal B are per the official Website. Gate assignments at Terminals A and B are based on personal observations and the summer 2009 Flugplan. While ELLX will work with "other" AI packages, I can't guarantee that every airline will park at the correct Terminal when using other AI packages.

While every attempt was made to eliminate errors, there's no such thing as "perfect" scenery. Please let me know if you come across any MAJOR errors or problems. 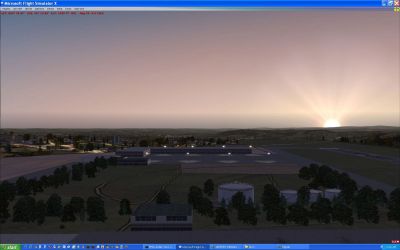 The archive ellx2009.zip has 12 files and directories contained within it.