Scenery FCH1 Abalkuri AFB. Geo-politic fiction: in the very strategic area of the Gulf of Aden, between the Red Sea (with the Suez Canal) and the Indian Ocean, near the East Horn of Africa as well as the south part Middle East, a series of small islands belonging to Yemen has been of high interes...

Scenery FCH1 Abalkuri AFB. Geo-politic fiction: in the very strategic area of the Gulf of Aden, between the Red Sea (with the Suez Canal) and the Indian Ocean, near the East Horn of Africa as well as the south part Middle East, a series of small islands belonging to Yemen has been of high interest for the world powers of all time. The largest, and most courted one, is Socotra. The nearby Island of Ab Al Kuri is offering very interesting possibilities to build a discreet yet a fully equiped large military installation with several airfields, a large harbour and multiple accomodations. Enough to insure a proper maritime traffic security. By Dominique M. L. Donzelot.

The region of the Gulf of Aden, being between the Red Sea (with the Canal of Suez) and the Indian Ocean, very close to the Arabic Peninsula, the Horn of Africa and the Irak/Iran area is, and have been for a very long time, considered of strategic importance by the various world powers. As today, the US and Russia are courting the Yemen to get permission to increase the existing airfield on the nearby island of Socotra. As a strategic fiction, we share here a model of what could be a French implementation in that region, especially, of course, to support the anti-pirates operation and to secure the sea traffic around.

This (ficticious of course) model shows: a main airfield (LHC1 Kilmia), with one long runway for heavy traffic and a shorter one for fighters, both equipped with ILS, an Ulm airfield near the military resort on the west and a "water" field near the Harbor on the East which, as a coincidence, is hosting an aircraft carrier with hard deck. Several places around including communication, cities, power supply and some wild animals here and there. The place have been made "greener" than the poor dry rock it is in reality.

Thanks to the authors of FSX planner and SbuilderX for those superbes development tools. Using only existing elements of FSX, this should not hit too much your FPS.

Thanks, a lot, to Charlie (Golf34) for the original request and to Patrick (Pat93) all from the France Aviation Virtuelle for helping with the testing of the scenery.

Its under my copyright, and should be only freely distributed and in any case never be part of a commercial package.

There is nothing there which could possibly damage your computer or your FS, so I am not taking any responsibility in any possible incident on your machines.

For the scenery itself, it is a dtandart kind of installation:
- unzip the files and folders under your add-on sceney.
- declare the scenery.

Unfortunatly, as far as I know, this scenery is not compatible with previous versions of FS.

Enjoy flying in that amazing area ! 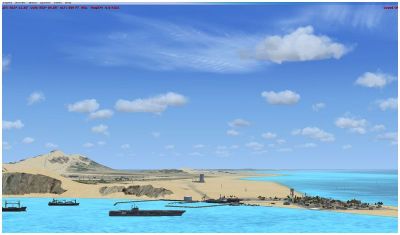 The archive fch1.zip has 27 files and directories contained within it.