This scenery was created for and tested under FSX SP2/Acceleration. If you do not have the Acceleration add-on installed, there may be some scenery objects that do not appear. This scenery is FREEWARE. This scenery package may only be distributed free-of-charge.

SPECIAL THANKS AND ACKNOWLEDGEMENTS:

Excellent original FS9 PHX Scenery by Mach 1 Design Group (Jaxan Prier, Jose Gutierrez), updated and re-released with permission.
ASR-9 Radar Antenna, Jim Dhaenens. Thanks to Jim, several scenery packages have very nicely modeled and realistic scenery objects that add a great deal of realism.
Airport updated and some scenery added with the Airport Design Editor by Jon Masterson/ADE Development Team. Thanks for an amazing tool that does so much!
Models updated with ModelConverterX by Arno Gerretsen. Thanks for yet ANOTHER great tool that seems to take care of any modelling need for FS. I have also recieved much help from Arno indirectly from his countless forum posts that enlighten us all in so many aspects regarding FS.
Thanks to everyone at FSDeveloper.com and all of the FS online communities where I found assistance and learned so much.

A FEW OF THE SEVERAL ORIGINAL MACH 1 FEATURES:

NEW FOR THIS UPDATE:

* Correction of taxiways/designators and aprons, including the completion of taxiway C and new intersections H5/G5, correction of centerline lights/lead-off lights
* Taxiway signage is corrected and placed with interpolation between real-life locations and allowing for readability in FSX
* Update of terminals to FSX models
* Addition of Terminal 3 helipad with custom beacon effect and windsock
* New airport vehicle roadways to re-create actual ones as close as possible
* Addition of FSX plants and trees throughout Sky Harbor Boulevard
* Phototexture scenery added, bounded by an area just west of 24th Street and east to Tempe Town Lake dam, and to the north of Airlane Road and south of the south cargo ramp
* Phototexture blended with Autogen and surrounding landclass as much as possible for better transition appearance
* Addition of ASR-9 radar antenna south of runway 25L
* 3D PAPI light fixtures
* Realistic blast fence additions
* New FSX moving jetways at all actual gate locations
* Relocation of airport beacon to actual location on top of old Ameriflight hangar
* Added airport boundary fences
* FSX vehicle traffic entering and exiting eastern portion of Sky Harbor Boulevard
* Updated COMM frequencies and radio callsign
* Relocation and addition of ILS localizer, glideslope, and DME equipment to reflect new antenna installations for 2011
* Landclass west of the airport changed for better realism
* Salt River is dried along the easter portion of the airport and stopped at Tempe Town Lake dam (the remainder western portion was not changed as this was outside the scope of this scenery project)
* Added ASU football stadium and new hi-rise condominiums near Mill Ave.
* Removal of a few incorrect stock scenery objects that do not actually exist

NOTE: The approaches were not modified or updated. This may be included in a later release. Also, the LOC BC RWY 25R approach is still included, although it is no longer published or authorized.
NOTE: The centerline lighting on the taxiways may seem irregular (especially on taxiway A), but this is true to the actual airport configuration.
NOTE: The runway 25L MALSR approach light sysytem was left intact because although it has been out-of-service for quite some time, once construction is completed the MALSR will be operational again.
NOTE: The extra glideslope antenna for runway 7R refelcts the current transition to install new equipment and both antennas are present.
NOTE: The optional night textures from the previous release were not included because of the photoscenery in this update.

ABOUT THE TERMINAL 3 HELIPAD BEACON:
I was forced to create a helipad beacon effect and controller due to the bug in FSX where adding the default civilian helipad beacon produces light cones (at least in my experience).
I have tweaked the effect placement and made it to look as realistic as possible, especially at a distance (I think it's better than the default beacon, anyway).
This beacon effect is released for use in other scenery packages.

To install: Place the SkyHarbor2009 folder into your addon scenery folder. Activate the folder from within FS.

Optional textures: These are re-worked default night time ground textures. The default night textures, in my opinion, were too bright. These textures will darken the area under the airport which will make the runways stand out better at night for a more realistic experience. These textures are not required but are recommended to fully enhance your Phoenix experience. They are also compatible with the default KPHX scenery in the event you want to uninstall SkyHarbor2009.

Peter Van Dyke and Brian Kircher for their photography efforts. Without them this scenery could never have been completed.

The great folks at Southwest Virtual and US Airways Virtual.

The rest of the flightsim community for being patient with me and providing the support needed to get through this project.

Our software is always free, but if you like what you see, check out the donation page on our website. 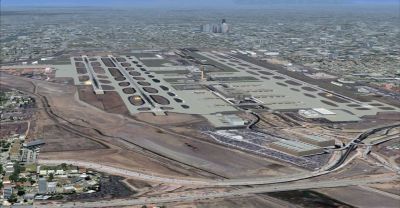 The archive phx_sky_harbor.zip has 218 files and directories contained within it.

In FSX (steam edition) for me inside the Addon Scenery, there is a scenery and texture folder. The SkyHarbor2009 folder goes in the scenery, right?