Gloster Grebe v3. The Gloster Grebe was a single seat biplane fighter with fabric-covered wooden structure and twin Vickers machine gun armament. It was powered by the 400 hp Armstrong Siddeley Jaguar. Top speed was 162 mph (261 km/h). The Grebe was very agile, but suffered from wing flutter, ... 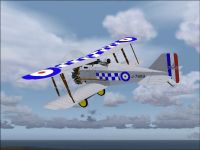 This archive contains the gauges missing from the previous upload. The gloster Grebe was a single seat biplane fighter with fabric-covered wooden structure and twin Vickers machine gun armament as the Sopwith Snipes it replaced, the only real advance – a 162 mph (261 km/h) top speed - coming from the extra power of the 400 hp Armstrong Siddeley Jaguar. The Grebe was very agile, but suffered from wing flutter, which lead to all RAF aircraft being modified with additional wing struts.

As an experiment, Grebes were attached beneath the R33 Airship for "parasite" trials. A total of 133 Grebes, including 2-seat trainer variants, were produced. Grebes were retired from the RAF in 1929, replaced in part by the Gloster Gamecock which was in essence a developed Grebe.

Effects:
-On startup there is automatic engine smoke.
-Then follow the exhaust flames with smoke.
-Continuous blue flames with smoke if engine is running .
-Guns with flash, smoke and falling cartridges can be triggered with the standard Strobe key (O).
It is much nicer however if you put the FS2004 standard Strobe key (O) to the trigger from your joystick.You can change this in the Key menu.
It is a good idea if you replace the standard (L) key for lights by the L+CTRL, (normaly activating the landing lights only). This avoids you having to have all lights on when pulling the trigger.

Installation:
NOTE: This version will work in FS9 but it will appear unrealistically reflective. You should use the dedicated FS9 version in FS9 or Golden Wings.
- If you have the first version of the Grebe, delete it.
-Unzip " Grebe" into a temporary file and move the "Grebe" folder into the main Aircraft directory.
-With slight mods the plane flies in FS2002 and CFS2 (Use MDLC program)
-Leave the PW-9.cab in your panelfolder.
-For FSX change the FSXpanel.cfg into panel.cfg.
-For fs9 change the FS9panel.cfg into panel.cfg.

-Read instructions carefully when installing the gauges , say YES...when asked if the gauges sources should be trusted. If you say no....most of the gauges are not going to work !

Texture note:
Alternate top wing textures are provided for the No.25 Squadron plane. References do not reveal whether the flight leader's bands were painted over the squadron stripes or broken to appear to run under them, so it was painted both ways. The way we believe is most likely correct is the default file in the texture folder. The folder "Alt 25sq top wings" contains a copy of each version so you can use whichever you prefer.

Flying the plane:
Remember...this is an early fighter biplane ! Manoeuvrability is good, it rolls fine and is responsive to rudder and elevator. Nice flying aerobatics close to the tower !
Gather as much speed as possible for a loop. On top of it, you'll be very close to the stall. Wing over, knife edge, segment rolls are all possible.
- Hold up elevator to start the engine, you have no brakes and the tailskid must firmly be on the ground to stop the plane.
- Take off at about 60, correct with right rudder
- Climb at 65, level at altitude, speed slowly builds up to 125 kts.
- Landing approach at 80, over the fence at 65, touchdown at 60. You need some up trim for a threepointer.
- Hold up elevator for the tailskid to brake the plane when taxying.

CREDITS
Special thanks to :
-GMAX for the drawing program and Microsoft for their makmdls.mdk.
-To Frank Elton whose FS98 textures were adapted for the model. 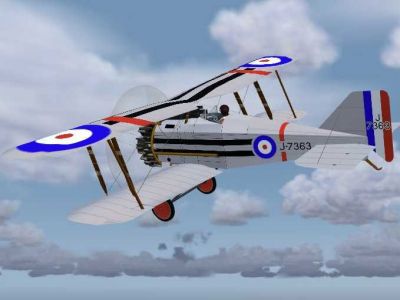 The archive grebex3.zip has 156 files and directories contained within it.