F-8 Bearcat Racer. A repaint of Michel Migaud's Grumman F-8 Bearcat, modified for Flight Simulator X. This aircraft has completely retuned flight dynamics to perform at speeds in access of 525 mph to match the performance of the famous F-8 racer Rare Bear. This Bear is very fast and agile and not...

F-8 Bearcat Racer. A repaint of Michel Migaud's Grumman F-8 Bearcat, modified for Flight Simulator X. This aircraft has completely retuned flight dynamics to perform at speeds in access of 525 mph to match the performance of the famous F-8 racer Rare Bear. This Bear is very fast and agile and not for the beginner. Painted in a fictional racing scheme. Modifications for FSX by Mark Rooks of RSDG aircraft. 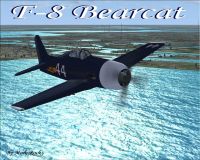 2.Copy the " F8F_Super Bearcat " folder and paste it in the main aircraft folder.

The archive f8rsdg.zip has 7 files and directories contained within it.