This is Michel Migaud and Cyril Breton's Socata TBM700 modified For Flight Simulator X. This aircraft is painted in typical two tone colors. Includes new flight dynamics and textures and updates and modifications by Mark Rooks of RSDG Aircraft.

This is Michel Migaud and Cyril Breton's Socata TBM700 modified For Flight Simulator X. This aircraft is painted in typical two tone colors. Includes new flight dynamics and textures and updates and modifications by Mark Rooks of RSDG Aircraft. 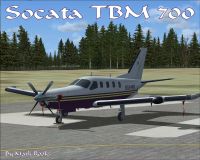 Screenshot of Socata TBM 700 on runway.

Textures and FSX updates created by Mark "Fire Ball" Rooks. Load the Guages and the panel.

DISCLAIMER:
WE CONNOT BE CHARGED FOR ANY DAMAGES/PROBLEMS/ERRORS CAUSED TO YOUR EQUIPMENT THROUGH USE OF RSDG FILES! USE ALL FILES AT YOUR OWN RISK! BY INSTALLING OUR FILES ON YOUR EQUIPMENT YOU ARE AGREEING TO THIS DISCLAIMER. ALL FILES VIRUS FREE AT TIME OF UPLOAD

The archive xtbm700.zip has 8 files and directories contained within it.