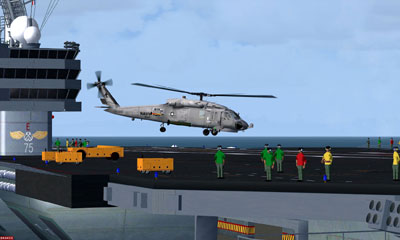 This is an exciting add-on and perfect for the guy or gal who wants to know what its like to fly a plane on and off of a carrier. This particular release has been upgraded for the FSX and FS2004. The enhancements made for that upgrade are pretty substantial.

Pilots will be trained at Naval Air Stations before actually hitting the decks. Training will take place in a turbo-prop T-34 Mentor. After an individual is able to master that plane, they will move on up to the T-45 Goshawk. Once a player has gotten past rookie status, they will be thrown into carrier launches and recoveries. This time, the plane at ones’ disposal will be the F/A-18C Hornet. The carrier where the launches and recoveries take place is the USS Harry S Truman.

Individuals will find that the Flight Deck 6 add-on has a lot of different planes. Individuals will have the opportunity to fly the T-34 Turbo Mentor, SH-60B Seahawk, T-45 Goshawk, E-2C Hawkeye, F/A-18C Hornet, C-2A Greyhound, F/A-18E Super Hornet and the EA-6B Prowler.

One of the coolest things about Flight Deck 6 is the many different missions and experiences available to players. There is the opportunity to participate in Blue Angel formation flying, bombing practice and combat maneuvers with the T-45, radar jamming near Panama, helicopter rescue and MiG-29 intercept, all pretty cool things to do.

There have been some pretty significant upgrades to Flight Deck 6. Amongst them are basic training for jets and Turbo-props, accurate launch and recovery courtesy of 3WireX technology, five exciting missions and nearly 100 mini-training missions compatible with Flight Simulator X.

The Flight Deck 6 is a really cool add-on. It is perfect for those individual interested in either learning how to fly on and off carriers or who have in the past and simply want to continue to grow their skill set and test their abilities.

Purchased Flight Deck 6 and there is no carrier, it disappeared the second time I used it.