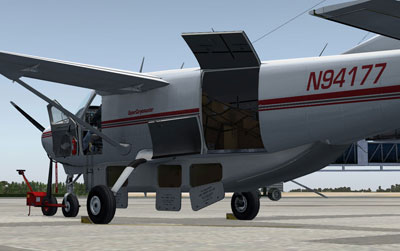 The Cessna C208B Super CargoMaster Expansion HD is another Microsoft Flight Simulator X compatible add-on. It can also be used with the C208B Grand Caravan. Carenado designed this particular simulator add-on. Its files size is moderate, at 53 MB.

This pack includes terrific textures that are in HD. There is a single paint scheme with an additional blank one. It includes HQ digital stereo sound, which has been recorded from anactual Pratt & Whitney Canada engine. The Cessna C208B Super CargoMaster Expansion HD comes with a customizable panel. Users will be able to adjust the load configuration, 3D knobs, doors, the cargo pod, pilot cover, wheel chokes, sights prop and tail stand.

Other cool features of the Cessna C208B Super Cargo Master Expansion HD add-on include quality HQ digital stereo sounds. These were recorded from a Pratt and Whitney Canada engine and are original recordings. Pilots who have actually flown the Cessna C208B have tested this particular add-on. One additional pretty cool feature is the night-lights effect on the simulated cockpit. Also included is Bendix/King Weather Radar, volumetric normal mapping and bloom lights.

All in all, the Cessna C208B Super CargoMaster Expansion HD is a really cool add-on. It is feature packed and makes for a really accurate and realistic flying experience. It’s also cheap and compatible with the Microsoft Flight Simulator X, making it a great addition to many people’s add-on collection. It is always a good idea to look for quality add-ons, which provide a lot of value. The Cessna C208B Super CargoMaster Expansion HD definitely does. Buyers ought to be pleased. It’s a good package.

View and purchase the Carenado CargoMaster on SimShack.net here.