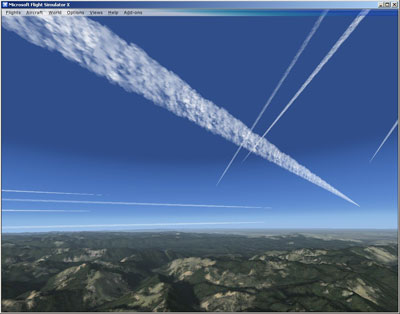 Released from developer Flight Sim Tools is their Contrails Pro package for Microsoft Flight Simulator X and 2004. The add-on adds realistic contrails to your own and AI aircraft, for that next level of realism in your sim experience. The package is frame rate friendly because of an advanced display engine.

Contrails Pro comes with its own optimized display engine, which allows displaying contrails in unprecedented detail while keeping high frame rates. When looking from a close distance, you will see the complex contrail structure thanks to the detailed textures supplied with the product. Just like in the real world, contrails will slowly dissipate in the air and will glow in red during sunrise or sunset.

There are excellent customization options allowing you to specify the contrail length, density, dispersion, minimum altitude for contrails to appear and a few other settings.