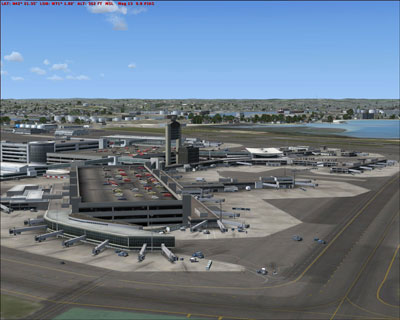 The Mega Airport Boston Logan Scenery add-on by Aerosoft is Microsoft Flight Simulator X and 2004 compatible. Available in a CD-ROM media format, this package is a good option for those interested in testing their flying skills in and around one of the United State’s busiest airports.

This add-on has a number of really great features. The ground textures are of excellent quality and are extremely detailed and accurate, mostly because actual aerial images are used. The airport’s lighting systems, buildings, institutions and navigation beams are all very realistic looking due to the ability of Aerosoft to capture the airport’s minutest details. Both dynamic and static objects are included to further amp up the realism factor. The airport is a virtual replica that is pretty true to form, which makes for a high quality and exciting simulator add-on.

Notable features of the Mega Airport Boston Legacy Scenery add-on include photo-realistic features of vehicles, buildings and ground images, apron with realistic textures, taxiways, terrific frame rates and a large number of runway and taxi signs. Please keep in mind that his is only an abbreviated list. There are many more features included.

In order to run this software, an individual must have Microsoft Flight Simulator X with SP or Acceleration Pack. Microsoft Flight Simulator 2004 works as well. A person must also own (or have access to) a computer that meets the following system requirements, a 3Ghz processor, 2GB RAM, a 3-D graphics card with at lest 256 MB and preferably 512 MB and 350 MB of free hard disk space.