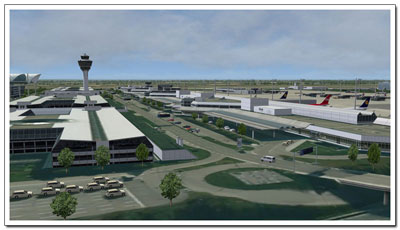 The Mega Airport Munich Scenery Add-on is compatible with Microsoft Flight Simulator X and Flight Simulator 2004. This is another affordable simulator add-on designed by Aerosoft, a respected name in the flight simulator industry. It can be purchased in CD-ROM media format.

The Munich Franz Josef Strauss Airport, featured in this add-on, is about 17 miles to the north of Munich, Germany. Star Alliance and Lufthansa, both airlines, have a hub here.

The Munich airport was granted the distinction of being the 2nd Best Airport in Europe by Skytrax. That same research company named it the 5th best airport in the entire world, both very impressive findings.

This particular simulator add-on includes a ground texture that is incredibly detailed largely because it has been developed based on aerial images. It includes an accurate rendering of airport institutions, buildings, navigation beacons, and lighting systems. Also included are docking systems, static and dynamic objects appropriate for a busy, international airport.

So who was this add-on designed for? The Mega Munich Airport Scenery add-on was designed for those individuals interested in simulating flight in and out of the Munich airport, one of the word’s very best airports. It provides a great opportunity to practice arriving to and departing from a very busy airport, which has been virtually rendered in a very accurate and detailed way.

Virtual pilots will find that this add-on is able to provide them with a have a pretty realistic and enjoyable experience. The quality of this sim add-on coupled with its price, makes it a heck of a bargain.

More information over at SimShack.