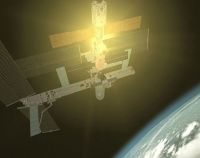 In March 2010, Exciting Simulations announced the release of a free Mission Pack v5.20 for the Space Shuttle Mission 2007 simulator.

A new set of updated manuals have also been released.

STS-130 was carried out by Endeavour on February 8, 2009, after the first launch attempt was canceled due to weather concerns. This 13-days mission delivered and assembled Node 3, also known as Tranquillity, which offers extra room for crew members and many of the ISS environmental control and life support systems.

The last American ISS module, Cupola, is attached to Node 3. Cupola is a Robotic Control Station with six windows around its sides, and another in the 'ceiling'. This provides spectacular views of Earth and visiting spacecraft.

You can purchase Space Shuttle Mission 2007 in downloadable format. You can also download the latest Demo version for free from here.

The Space Shuttle Mission Simulator is designed to provide the experience and thrill of the NASA Space Shuttle missions in great detail. This tool allows the user to operate knobs, switches and keyboards and enjoy the view of a fully equipped 3D Virtual Cockpit. In this simulator, every command, button and action replicates the real experience of mission sequences in stunning detail – from launch to in-orbit missions and landing.