Overview - This updates Malabo Intl the airport serving the capital of the nation of Equatorial Guinea for AI traffic - specifically the World of AI packages.

Location - FGSL is located a few miles west of the city of Malabo. The city and airport are located on Biko Island - a 70km x 32km island in the Gulf of Biafra - approx 130 nm northwest from the mainland portion of the nation. The airport is located on the northwest corner of the island.

The nation has become an important source of oil in recent years, increasing private and commercial air traffic.

FSX - Biko Island is the home to approx 124,000 people - however FSX land class has only the capital city of Malabo on the north end of the island. The rest of the island is forest and various other non-populated land class. Depending upon your mesh - the island will have a near 9,000 ft volcanic peak. The FSGenesis World Terrain Mesh has a very nice volcano crater on the south end of the island.

Airport changes - Google Earth imagery is April 2004 - about 1 year older than the FSX default data. The aerial images show the runway and main aprons to be concrete, however there is much older stained concrete ramp areas and taxiways on the airport, which cannot be duplicated with default FSX scenery textures.

Recently a photo showing extensive new construction at the airport was posted on airliners.net. I did not attempt to create the south taxiway extension to full length of the runway. The new terminal and ramps on the south east end of the airport. The new ramp (govt? military? cargo? oil company?) on the south west side of the runway nor the cross runway taxiway.

I have not attempted to replicate the various damaged and scrapped aircraft on different parts of the airport.

No parking codes are used for the main terminal. The two CEL ATR aircraft will park near the terminal. One between the jetways in Gate 5 and one just north of the terminal in Gate 3 - both of which are 14.1M in size. 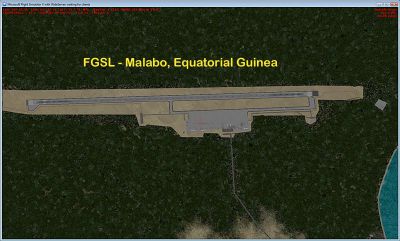 The archive fgsl_ade_rjf_v1.zip has 13 files and directories contained within it.