Great Air force one addon for FS2002. Adds Air force one to your FS2002 collection of aircraft. Stunning 3d effects, flaps, ailerons. With added people on the ground when engines are off - Includes George Bush!

File Contents
Great Air force one addon for FS2002. Adds Air force one to your FS2002 collection of aircraft. Stunning 3d effects, flaps, ailerons. With added people on the ground when engines are off - Includes George Bush! 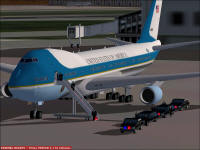 The archive 742af1.zip has 51 files and directories contained within it.

Having not used my FS2002 simulator in a while, I decided to have a look around and see what interesting mods and additions existed for use with the simulator. I came across this remake of the Boeing 747, complete with a full design that fits with the old Air Force One style.

It was, naturally, a very interesting kind of flight to take on and I enjoyed it immensely – but the thing that impressed me most, however, was the sheer quality of the model. It manages to capture all of the little key details that other FS2002 mods would never have been able to add, as it takes a huge amount of inspiration from more recent mods and updates.

This package was designed to give you the Air Force One aircraft, the one that the President of the United States would have been carried in when they still used the 747. It was a very interesting style of the aircraft, despite the fact I’ve flown a 747 in many different simulators on countless occasions; therefore, the overall dynamics and the style lf the aircraft were not something I paid too much attention to.

I did notice, though, that the realism of the setup and configuration of the aircraft was bang on – it felt just like the real thing should have to me, having been on 747 aircraft in the past

As you might imagine, though, this feels a bit more “jazzy” than the real thing. It’s got style and it’s got a bit of extra quality to it, given the importance of this aircraft. Again, though, the level of attention to detail and design felt like something for a later sim instead of a port for a simulator that’s over a decade old!

It also had lots of people on the ground when the engines are not on – and this includes the old President of the United States. Whatever you think of Bush and his overall style as a person, it’s a nice touch to have a political dignitary added into the picture – and you’ll be able to tell that it’s Bush as well; he looks just like you would have hoped! It’s got the hair down and everything, which is obviously very impressive.

The aircraft itself has that “big” feel to it, making it feel as if you are actually in charge of one of the most important aircraft around. It has amazing 3D effects included to help make the flight easier to get into, but it also comes with classy style and effects for things like the flaps and the ailerons. Other than that, though, it looks and feels just like your typical Boeing 747.

If you’ve, like me, always entertained the idea of flying this kind of aircraft in the past then I highly recommend that you pick this up and give it a while – it’s a whole lot of fun. Even though I’m not from the US, it was cool to fly such an important part of the political aviation history.