Air Sahara is an Indian regional airlines and operates a few dozens of these types of aircraft but different variants, mostly -200's and -800's. This is a ficticious repaint as Air Sahara does not have any 500 series aircraft. Original model by Erick Cantu and repainted by Shivendra Shukla. 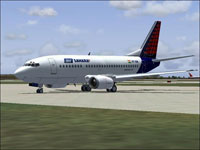 Screenshot of Air Sahara Boeing 737-500 on the ground.

Air Sahara was an Indian regional airline that commenced operations in 1993. Originally known as Sahara India Airlines when launched, it flew under the name JetLite after the 2007 takeover by Indian airline Jet Airways. From its main hub at Indira Gandhi International Airport in Delhi, JetLite flies throughout India as far as Port Blair in the Andaman Islands, though most traffic is focused on major cities such as Mumbai, Kolkata and Bangalore.

At one time Air Sahara flew an international route to Colombo, Sri Lanka, but that has been discontinued. In March 2012 JetLite was merged into Jet Airways' Jet Konnect brand. The mainstay of the Air Sahara fleet has always been the Boeing 737, the initial fleet being comprised of two 737-200s. Before the merger in March 2012, nineteen 737s were in service, with nine 700 series, eight 800 series and two 900ER aircraft making up the fleet.

The archive b735as.zip has 70 files and directories contained within it.