Textures only. This repaint of the default DC-3 represents the SAA Dakota 'Zwartkop' (ZS-BXJ) as flown in the late 40s/early 50s. Currently awaiting restoration for the SAA Historic Flight, it is the sister aircraft of the famous 'Klapperkop.' Repaint by Grant MacLean based on Mark Beaumont's paint templates. 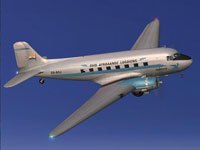 The DC-3 'Dakota' has enjoyed an illustrious South African career. Like many of its fellows, ZS-BXJ 'Zwartkop' was built during WW2 (1944, c/n 12413) doing valiant air force duty before being transferred to SAA after the war for use on local and regional service. After almost 25 years' service SAA "Daks" were returned to the South African Air Force -- one of the Worlds largest operators of the DC-3 with over 80 examples -- for duty in the Angolan war and in the Namibian border campaign. Re-acquired by SAA, 'Zwartkop' is currently awaiting restoration for the SAA Historic Flight.

Because the default DC-3 textures make complete accuracy impossible -- wing and tail registrations or nose text/art being reversed, etc. -- this 'Zwartkop' repaint may not be 100% accurate, but I hope that the unavoidable adjustments still present an aircraft that captures the general look and feel of a SAA Dakota of that era. If not, maybe simmers will forgive this first repainting attempt. Anyone wanting an accurate SAA DC-3 from that era could invest in MAAM-SIM's beautiful version of 'Klapperkop.'

The archive dc3saa.zip has 11 files and directories contained within it.