This is an update for FSX of the SU-33D Flanker. At least it was billed as the carrier version by the person who uploaded it, even though it has no seeable tail hook. There is no readme file or any other file with the download that tells who uploaded it. The flight dynamics have been updated and ...

This is an update for FSX of the SU-33D Flanker. At least it was billed as the carrier version by the person who uploaded it, even though it has no seeable tail hook. There is no readme file or any other file with the download that tells who uploaded it. The flight dynamics have been updated and it has been given a second 2D panel with American type gauges so people can fly it easier than trying to learn to read meters above the ground, etc. A tail hook light has been added to each of the panels so you can tell when the invisible tail hook is down, the size of the GPS has been changed on the Russian panel and new burner and flame effects for the aircraft have been made. No virtual cockpit. By Bob Chicilo.

The aircraft is set up to use the American panel; if you want to try the Russian one, open the Aircraft.cfg file and remove the 27 from the panel= line. To switch back, just put the 27 back on the panel= line.

The tail hook light is just to the left of the air speed gauge on the Russian panel and just under the flaps gauge on the American panel.

The cruise speed and altitude are ones I picked without knowing the real cruise speed or altitude of the aircraft. Either, or both could be wrong. I know that the aircraft has more range than it is supposed to. If this bothers you, go into the aircraft.cfg file to the [general engine data] section and change the: fuel_flow_scalar= 1.0; to something like 1.50, or whatever makes you happy with the range.

The reason I wrote new burner and flame effects can be seen if you look at the picture named photo (4). It is a picture of the real aircraft taking off from a carrier. Besides showing the color of the flames, this picture, and another one I saw while looking up info on the SU-33, showed me that the aircraft does not use a catapult to take off of a carrier. The carrier in the picture is the type used by harrier type aircraft that do not need a catapult to take off; so the bow of the deck is curled up to assist with a short take-off run.

That is why I did not add a restraints section to the aircraft.cfg file so it could use a catapult to take off. I have landed on, and taken off of a carrier with this model so I know it will take off of a moving carrier if you are anywhere behind where the catapult starts. Just hold the brakes until the engines spool up or the aircraft starts to move in spite of the brakes being on.

I have included a flight for carrier practice with the SU-33. From feedback from other updates, I know that the flight might not work for you, in that the carrier may not be there. I don't know why that happens to some. If anyone does know, I would appreciate them sending me the information.

The archive su33dupx.zip has 1024 files and directories contained within it. 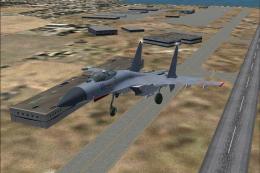 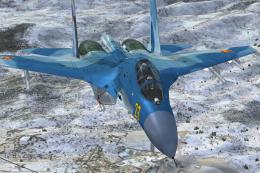 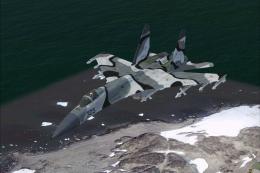 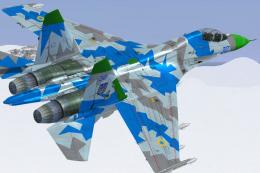 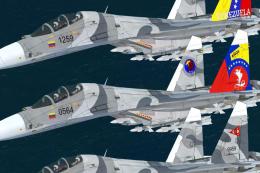 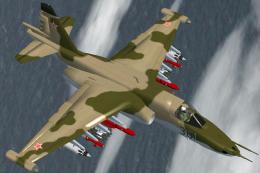 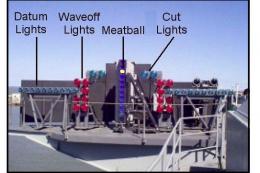 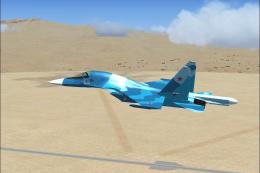 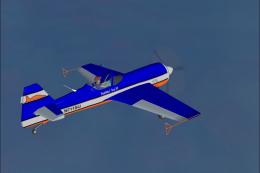 Great aircraft, the Russians really know how to build them, especially coming out of the JSC Sukhoi Company. Nice job on this beauty. I think the blue afterburner exhaust looks good. Let me know when you have a Su37 available, I'm ready to try the Cobra Maneuver in the Su33. THANKS