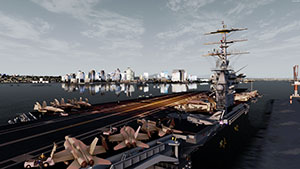 The package features the USS Nimitz along with supporting ships including the USS Eisenhower. Most of the deck is animated including thrust directors, elevators and catapults. Also included is a hangar below deck with custom lighting and a stock of AI aircraft.

This freeware add-on brings a fully working aircraft carrier to your simulator. Some say this is the best freeware carrier add-on available for FSX/P3D. You can place the carrier anywhere in the world using an additional AICarriers program or use the routes that come as standard.

You are able to take-off, land and walk around the ship and perform simulated military missions.

It's recommended to be used with AICarriers so you may configure the ship and place it within your simulator where you would like.

CHANGES IN THIS VERSION

RECOMMENDED ADD-ONS TO BE USED WITH THIS PACKAGE

Very special thanks to Sylvain Parouty (thanks for the no_Wake fx), Michael Davies and 'Noshadez' from the "Sim Outhouse" forums for their invaluable assistance. Thanks to Lamont Clark for his amazing software. Thanks to Jeff (Navychief8), James Chams and Robert Morono for their excellent suggestions and feedback.

This package is freeware. Selling this package or part of it is not allowed without the written permission of the author. Any modification of this package must credit me as the original author. This Addon is NOT endorsed by the U.S. Navy.

The archive uss_nimitz_ike_version2.zip has 372 files and directories contained within it.

One thing that I always found a little strange in their absence or important were aircraft carriers; as a massive part of the military aviation scheme, they aren’t really a big feature within FSX or other flight simulators such as Prepar3D. At least, they aren’t as big or as central as they should be.

Thankfully, though, the lovely communities that play these simulators have created some truly awesome additions over the years from scenery and aircraft to, you guessed it, new aircraft carriers. With this package, you can introduce the USS Nimitz and USS Eisenhower into your flight simulator.

I was looking forward to seeing how these aircraft carriers would be represented in-game, and I need to admit that the quality of the carriers was absolutely awesome.

The AI that works in the carriers means that they actually move around instead of just sitting static like a large ornament you can fly from, creating a fantastically realistic atmosphere in the sea for you.

These new aircraft carriers come with realism made as one of their key mandates; from the catapult steam that emits from the aircraft to a whole host of new animations, you get some of the most realistic aircraft carriers to look at and take off from around.

One of the main features I really enjoyed playing around with, though, was the deck configurations – you can make it as busy or as clear as you want, letting you have a really bespoke flight path. This makes mastering your take-off and getting used to the aircraft carriers style in comparison to a normal airport much easier, as the difference can be a little bit strange from time-to-time for some users!

Many new features are added into this version too, which can help you get a lot of assistance with things that affected enjoyment and performance in the past. From lightning issues to the texture of the aircraft, everything has been improved to make this the most life-like aircraft carriers that you are likely to come across.

As you might expect, taking off from an aircraft carrier – especially such a realistic one – is a bit of a new challenge for some. It can take a lot of planning and preparation, and usually will lead to you having to adjust how you are flying or taking off in some style, but the extra change in normality can be an excellent source of inspiration and enjoyment for you!

I was massively impressed by this mod and found that it helped to create something a little bit fresher for my FSX/P3D experience than others, giving me something to really get my teeth sunk into in terms of mastering the take-off, whilst simultaneously being able to improve the atmosphere in-game dramatically.

I take it that’s a ‘No’ to MJFly22 Now question about a manual! This is the most difficult installation of flight packages I’ve ever attempted in 30 years of flight simulation. It should come with a warning. Don’t even attempt it if you are new to flight simming. I managed it but not by using the unobtainable Java JRE 125. Even so, I fouled up my flight simulator set up and lost RAAS Professional.

This is exactly what I was searching for to add to FSX. Question; is there a manual I can download for this Nimitz Carrier add-on that explains how to use it to its fullest extent?

Ya its simple all of you u just need to download ai carriers then download this addon or it wouldn't work...

Ok, I got it to work. Follow the instructions as per the notepad. Then after you run P3D/ FSX, run AI Carriers. It will just be a blank window saying 'Connected to Lockheed Martin Prepar3d v4'. Then, go out into the ocean with your airplane (in the air), and go to Addons menu (hold Alt key), AI Ships. Select the ships that you want and spawn them 1 nm or however long you want ahead of you.

Installation folders do not exist. Did everything unzip or did I lose files?

How to use the elevator?Thanks for this awesome Carrier!

copy cvn_68_69.cfg into 'conf.d' folder inside your 'Aicarriers' installation folder. Do I have to create this folder? Does this mean the AiCarriers2 software? Sorry to be dense!

The cables won't catch my tailhook and I don't know how to catapult. Can anyone help me please

When I go to save the cvn_68_69 contents in AIcarriers2 I get the message that I'm not authorized. Can't find a work around. Help?

hi , my name is Ruan Ricarte .

I downloaded more can not put the aircraft on the deck and did not know how to operate the elevators.

I'll be waiting for a return.

It`s perfect, i`m very hapy with the aircraft carrier. Thank a lot. The frecuency of the ils es 112.00

I downloaded it and cant get it too work, I can use the simulator fine but when it comes to adding things like this with a lot of instruction I get a bit thick and don't know what to do, could you help me please as this look great to use

Need help installing everything. Sorry I am noob at this and tried reading the read me files. Didnt quite make since of everything. Someone please help. This mission looks so cool.

Where can I find it? I don´t have aircarriers

Looks great but how do i find it in the ocean

(I used aicarriers2 but that didnt work)

Thank for all the years you have provided such great service to the sim world....