Antonov AN225. Native FSX model of the AN-225. Comes with working virtual cockpit and a basic 2D panel. Uses default sound and soundai. Repaint sources included. Works with SP1 and SP2 but not tested with DX10. Multiplayer compatible model included. By Thomas Ruth.

As you can sea, almost everything of the virtual cockpit of the AN124 and tze AN225 is hand painted and does not base on photos. Also most of the switches and gauges of the cockpit do not the same as they do in reality. I never had the chance to visit a real world AN124 or AN225. I would like to create a much better cockpit which would contain as much "real world" functions as possible. I would like to visit a AN124 or AN225 with my camera to take as much pictures of the outside and the cockpit as possible and to ask as many questions as possible to the crew. I am living near EDDL in Germany and can go
to any airport within 500 kilometers around (With a box of german beer in my hand, of course). If you could make this one possible, me and a lot of flightsim people around the world would be the most happy people on earth. 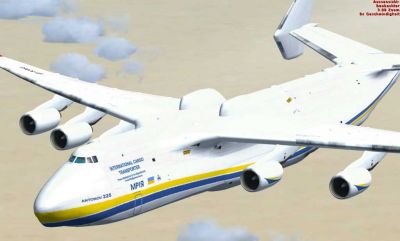 FSX Antonov AN225 in flight.

The archive tom225x.zip has 114 files and directories contained within it.

As far as aircraft go, there are few more interesting looking than this brilliant Antonov AN225 model. With a rather interesting design style, you can hop into the cockpit of one of the more interesting aircraft on the circuit and enjoy something a bit more unique and challenging than some other models may be. This remake of the aircraft by Thomas Ruth has been designed to give you a brilliant level of realism and performance, using a fully working virtual cockpit as well as a basic 2D panel selection that makes it nice and easy to see where you are going and what you are doing.

Additionally, re-painting sources are included so if you are good with editing you can easily take the basic liveries and update, change and edit them to fit the style and the look that you were hoping for. This package uses the default sounds and soundAI, and is fully compatible with both SP1 & 2 within FSX. Best of all, though, is the fact that this is totally compatible with multiplayer sessions so you can easily load this up online and show off your awesome design to friends and fellow pilots!

Just about everything in this package has been made using hand-painted designs, rather than just slapping photos down as textures. This means that gauges and switches might hold some slight differences from what they would be expected to have in real life. However, it does maintain all of its real-life functions and this means that – minor design issues aside – this can give you a really realistic and engaging experience of what an aircraft like this can be like.

Installation is simple as ever – you just need to extract the relevant files into the correct locations within FSX. This makes it nice and easy for you to manage the aircraft and get it installed nice and quickly so that you can concentrate more on flying around and enjoying it!

The AN-225 is an aircraft that carries a lot of positive features about it ever since its first release in 1988. The aircraft is still in service today and is unique in that only one was ever crated. Powered by an incredible six turbofan engines, it is both the longest and heaviest aircraft that has ever been created; it has a maximum take-off weight of 640 tonnes! Indeed, it has the largest wing span of any aircraft that is currently operational.

It was designed to be so large so that it can actually transport the Buran spaceplane, however it has served Soviet military purposes far more often and was eventually refurbished as a commercial equivalent for carrying large payloads. This aircraft holds the interest world record of carrying the largest single item payload, a stunning 418,834 pounds. It also carried a total payload of 558,577 pounds which is also a record. In short, this aircraft is a massive machine that can lift just about anything out there! To get a taster of this unique Ukrainian aircraft, pick up this package right away.

Great!! It works but I don't know how to drop the shuttle on it. Somebody help me please.

Hey i am not see anything about this plane.I just see wings and interior cockpit

Overall best plane I have downloaded off here.. Great Job

I dont see any body, fuselage, wheels, engines, just wings during camera view from outside... Could anybody help me?