MS760 Paris No. 65, FAF, EL 41 Verdun, 1978. This is a repaint of Tim Conrad's MS760 Paris (MS-760PARISJET.ZIP). Aircraft is shown in classic markings for the late-seventies period and belongs to EL 41 "Verdun" which was in charge for the transportation of high-ranking officers serving with the Air Force Tactical Command (FATac-1ere RA) located in Metz. Repaint by Michel Gerard.

This is a repaint of Tim Conrad’s MS760 Paris (file names: ms760.zip + MS-760_FIX_KIT.zip on SimOuthouse). Aircraft is shown in classic markings for the late-seventies period and belongs to EL 41 "Verdun" which was in charge for the transportation of high-ranking officers serving with the Air Force Tactical Command (FATac-1ère RA) located in Metz.

Installation is quite straightforward. Extract all files with the "Texture.65" path in this archive (making sure that "using folder names" is ticked) to your FSX\SimObjects\Airplanes\MS-760 installation folder, and everything should go to the right place. 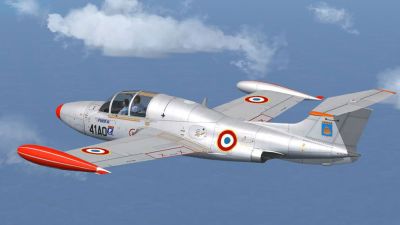 The archive 760_65.zip has 29 files and directories contained within it.