Acceleration RAF Beagle Basset CC1. Native FSX model of the Beagle Basset CC1 light twin with modelled gauges, bump mapping, specular shine, DDS textures. Includes two paints, one for XS 777 and one for XS 770 of the Royal Air Force. This is an updated model with night lighting. By Robert Richard...

Acceleration RAF Beagle Basset CC1. Native FSX model of the Beagle Basset CC1 light twin with modelled gauges, bump mapping, specular shine, DDS textures. Includes two paints, one for XS 777 and one for XS 770 of the Royal Air Force. This is an updated model with night lighting. By Robert Richardson.

Installation is as usual, normally to folder: Program files/Microsoft Games/Microsoft Flight Simulator X/ SimObjects/ Airplanes// or to which ever is your FSX aircraft folder.

Most of the sim controls are as normal, to make the external tanks appear just go to fuel and payload in game and add fuel to these tanks or just park in a fuel slot at your local airport and they will show.
The pilot will disappear and wheel chocks matelialise when engine is shut down, after about 30 seconds or so.
The pilots oxygen mask is hanging and goggles are pulled up while on the ground then at 2000 ft or so they will be in place.

History: In September 1943, one of the first jet fighters in history streaked skywards, with Geoffrey deHavilland at the controls. The deHavilland D.H.100 Vampire, a single seater, flew through the design process in just sixteen short months, spurred on by wartime exigencies. Nonetheless, the plane didn't see active service until June, 1946 flying with RAF squadron number 247 under the name Vampire F.MK 1, an aircraft used mostly in an experimental role.

Further development in the design led to the creation of the Vampire F.Mk3 which replaced all of the F.Mk 1's in service with the RAF. The F.Mk3 was also an export fighter with four going to Norway and eighty-five to Canada. Under special arrangement with Australia, eighty were produced by deHavilland Aircraft Pty Ltd. Powered by the Australian-made Rolls-Royce Nene engines, they were reclassified as Vampire FB.Mk 30s. The FB.Mk 5 was a version of the F.Mk3 optimized for the purpose of ground attack. With a strengthened wing and shorter span, it was well suited for this role. (This version drew a lot of worldwide interest, and many were sold to, or license-built by, other nations. Italy's Macchi company built at least 80 Vampires, and France's SNCASE built at least 250 Sud-Est SE 535 Mistrals.)

Another version of the Vampire, the D.H.113 Vampire NF.Mk 10, was a two seat night fighter. The NF.Mk 10's double-wide seating, like that in the deHavilland Mosquito, led to the development of the D.H. 115 Vampire trainer, notable in aviation history as being one of the first planes with ejection seats. The UK's Fleet Air Arm flew a navalized version of the FB.Mk 5 called the Sea Vampire F.Mk 20.

Thank you to all the very clever people who helped me in the making of this aircraft Dave Garwood for helping with the gauges and other XML Peter Mcleland for pilots notes and cockpit pictures and other information Martin Pengelly for his generosity, giving me his copy of "Vampire, The Complete History". 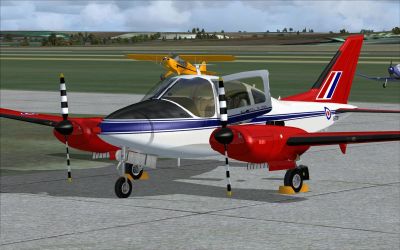 The archive beagle_basset_cc1.zip has 60 files and directories contained within it.