Gaspesie Peninsula, or Gaspe Peninsula is part of the south shore of the Saint Lawrence River in Quebec, Canada. By Gilles Gauthier and Jean St-Cyr.

Gaspesie Peninsula, or Gaspe Peninsula is part of the south shore of the Saint Lawrence River in Quebec, Canada. By Gilles Gauthier and Jean St-Cyr.

The Gaspésie (official name) or also Gaspé Peninsula or the Gaspé is a peninsula constituting part of the south shore of the Saint Lawrence River, in Quebec, Canada. It extends into the Gulf of Saint Lawrence and is separated from New Brunswick by the baie des Chaleurs and the Restigouche River.

The interior is rugged, being a northward extension of the Appalachian Mountains. This range is called the Chic-Choc Mountains. A section of the International Appalachian Trail travels along the peninsula. Route 132 circles the peninsula, with one branch following the coast and the other cutting across the peninsula at Sainte-Flavie. Forillon National Park is found at the northeastern tip of the Gaspé.

The easternmost point of the peninsula jutting into the Gulf of St. Lawrence is called Cap Gaspé. The name "Gaspé" comes from a Mi'kmaq word gespeg meaning "land's end".

SCENERY: Copy the files to the "Addon Scenery" of your Microsoft Flight Simulator X (FSX) folder.

FSX: Activate the scene into your "FSX Scenery Library"

This flight simulator product has been produced by Jean St-Cyr and Gilles Gauthier.

This package is freeware and is to remain freeware.

We do not believe that this file can in any way harm you or your property. Use it at your own risk.

Have fun flying over Gaspe peninsula! 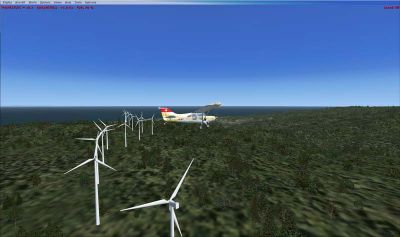 The archive gaspesie.zip has 33 files and directories contained within it.