CCCFSX Scenery (CA). CCCFSXC is a compilation of CCCFSX FSX scenery released on 4/25/08 that includes the four subsequent revisions. If you've already installed CCCFSX.ZIP and its four revisions, you don't need this file. This California Central Coast scenery covers the area from Paso Robles in t...

CCCFSX Scenery (CA). CCCFSXC is a compilation of CCCFSX FSX scenery released on 4/25/08 that includes the four subsequent revisions. If you've already installed CCCFSX.ZIP and its four revisions, you don't need this file. This California Central Coast scenery covers the area from Paso Robles in the North to Santa Barbara in the South with about 22 points of interest. By Al Wheeler.

INSTALLATION:
There are several ways to install the files. Shown below is the way I believe is the easiest. Your FSX drive and path is probably different than mine so I do not show the entire path below. If you used the default FSX installation path , where I indicate "FSX" you would use "Flight Simulator FSX" directory. In any case, it's where the FSX.EXE is located.

1) If required (See NOTES: UTX AND CCCFSX COMPATABILITY below) Install the modified Terrain.CFG per the instructions in the fsx_modified_terrain_cfg.ZIP file you can download from Avsim (See Links below).

5) Start FSX and from the World, Scenery Library screen select Add Area and add the CCCAFD afd, CCCLC landclass, and CCCFSX scenery files that are now located in the FSX\ADDON SCENERY directory.

6) Insure that the CCCFSX scenery and CCCLC landclass scenery have a higher priority (smaller number) than any other Land Class or Mesh Terrain scenery (i.e. Genesis). Also IMPORTANT: assign a LOWER priority to the CCCAFD scenery than the CCCFSX scenery. To be safe here, just give CCCFSX, CCCLC, and CCCAFD priority 1, 2, and 3 respectively. This will in no way affect any other FS scenery.

7) Install the library BGL and textures for ga_planes_1. This library can be placed in an appropriately entitled scenery directory in the FSX\Addon Scenery directory also. Be sure and add this into the Scenery Library. Priority assignment should be lower (i.e. 4) than the CCCAFD scenery installed above or these AI A/C will be excluded.

8) Set the Mesh resolution setting to 10 in the Options, Settings, Display, Scenery screen.

9) This completes the installation of the CCC scenery.

Recommendations for the best display of this scenery:

REQUIREMENTS:
Genesis landclass improves the look of the area greatly but is not strictly required.
Genesis mesh V2 plus a mesh resolution slider setting of 10 is recommended for proper display of coastlines, high sites, etc.

The modified Terrain.CFG is essential unless you have Ultimate Terrain X installed (See the NOTES UTX regarding this). Without it much of the CCC coastlines will have no detailed surf lines. It should be noted that the Terrain.CFG reverts to the default when SP1 and SP2 are installed and has to be replaced with the modified terrain.cfg following each of the SP1 and SP2 installations.

ga_Planes_1, although created for FS9, are required for many static A/C to display. These are low FPS impact objects.

NOTES:
CCC SCENERY SETTINGS:
Most of this scenery is set to Very Sparse. Most Static aircraft and ground vehicles are set to Dense so they can be turned off if FPS are an issue. Static aircraft scenery BGL files are an easily identifiable 8 files (ACXXX.BGL) and could be placed into a separate scenery directory if desired for additional control as long as they have a higher priority (smaller number) than CCCAFD to avoid exclusion.

Static AC (Except at Warbird Museum): DENSE, NORMAL to kill
Most cars at airports: NORMAL, SPARSE to kill
All Else: VERY_SPARSE, can't kill (Immortal)

AFD FILES:
The CCCAFD files (AFX2_XXXX.BGL) files that contain airport data are used also for many ground textures, markings, exclusions, etc. in and around airports. I also used closed taxiways unconventionally to create some purely visual effects (roads, lines, etc.) that will appear as errors if the AFX Fault Finder is run which might be confusing. Overriding, removal and/or some modifications of those files would probably make an interesting mess of the CCC FSX scenery.

Ultimate Terrain FSX is a nice piece of work but my CCC scenery won't be compatible with it unless I trash a lot of what I've done. The biggest problems are roads and coastlines and that's a lot of what UTX and CCCFSX are all about. Therefore, I've not attempted to do a UTX version of CCCFSX.

I've been disabling UTX when I'm working or flying in the CCC area. This is easy to do with UTX's setup tool by just clicking on quick enable/disable.

AI FLIGHT PLANS:
These flight plans utilize only default FSX aircraft to keep them universally useable. If you don't want to use the flight plans you can just skip installing Traffic_CCC_FSX.BGL but without it you'll have minimal to non-existent AI traffic at some of the CCC airports.

The AI flight plans consist of 99 AI flights between all 8 CCC airports. There are departures every 5 minutes for an hour or so beginning at 0000Z and repeating every 2,4,6 or 8 hours depending on length of flight resulting in fairly continuous AI activity at the 8 airports. I used these flight plans for testing AFCAD files and tried to reflect real life activity where possible except for the inappropriate use of big iron airline A/C here and there.

The flight plans were made using AI FLIGHT PLANNER by Don Grovestine; a very nice utility available at Avsim : http://library.avsim.net/download.php?DLID=121506 With this utility you could easily edit these flight plans if you like.

Oceano L52 14' MSL, San Luis Bay and Avila N35° 5.98', W120° 37.14' :
Oceano is an uncontrolled single runway field. There are no NavAids available. Following the coast to the north of the field you fly over Avila Beach, Port San Luis, San Luis Obispo lighthouse at Point San Luis and the Diablo Canyon nuclear power plant around the Point to the North.
L52 Comm:
UNICOM 122.70 MHz
AM Radio(Arroyo Grande) 1280 KHz KXTX

COMPATIBILITY:
This scenery is probably not compatible with any other third party scenery for the CCC area and visa versa. This is especially true of AFD (AFCAD) files.

TAXI/RAMP TEXTURES:
I've uploaded a file TAXITEXTUREX.ZIP to Avsim and Flightsim that has revised taxiway/ramp and marking textures that I like better than the default. You may or may not agree but they're available at:
http://library.avsim.net/zipdiver.php?DLID=121301

ELEVATIONS and LIBERTIES:
MSL elevations may vary from real life a little here and there to accommodate the need to have flat terrain for runways and to better fit FSX terrain.

I exercised my exclusive powers and took a few liberties here and there. The dam at Cachuma Lake isn't really a concrete structure. It's actually an earthen dam. The default dam isn't terrible and it's better with the Genesis V2 mesh but I gave up trying to make it look earthen without scary looking lumps and bumps so I used a FSX revised version of the concrete dam I used in the FS9 version of CCC.

I took some liberties also at VBG. The Saturn V of course never launched from there and, though VBG is equipped for it as an alternate, the space shuttle rarely ever lands there. The buffs probably are out of place also. Everywhere else I tried to conform a bit better.

CREDITS:
This scenery was constructed using: 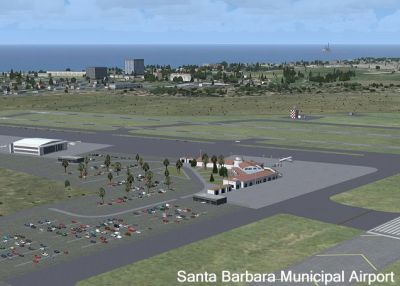 The archive cccfsxc.zip has 256 files and directories contained within it.