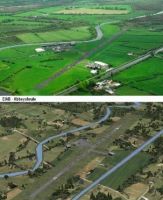 The default FSX scenery for the island of Ireland is an improvement over FS9, but there are still some details missing. These files include a bit of added detail for the province of Munster, which in FSX extends north to Galway and Connemara. I've added some town textures, rock textures for the Burren and the Aran Islands, and golf courses. How could it be Ireland without Ballybunion, Lahinch, Tralee, Dooks, or Doonbeg and the Old Head, not to mention the great Cork courses: Muskerry, Monkstown, Douglas and Cork. These and several more have been dropped into the landscape.

is also missing several Irish aerodromes and small airports. I recently downloaded an excellent set of airport files by Ronan Kyne: Irish100.zip, and I want to thank Ronan for inspiring me to do a bit of scenery design again.

The first thing I noticed when I loaded up Ronan's scenery was that FSX had EIIR (Inisheer) in the wrong location, so I have moved it. I've also slightly re-positioned Ronan's Inishmore and Sligo runways. If you have Ronan's "Irish Scenery 1.00", you might want to look at the airports I've duplicated and pick the versions you prefer. My version of Birr Aerodrome is a complete re-design based on photos.

I've added several aerodromes, and where available, I've used aerial photos to make them as realistic as possible. In the absence of photos, I've had to invent layouts. For your information, some of the aerial photos are included in the docs folder.

Finally, I've updated my home airport, Cork. I've placed some generic buildings where the new terminal should be, and I've added the flight school on the right of runway 35. Unfortunately, I don't know how to create buildings from photos, so EICK needs someone to do a version of the beautiful new terminal. Anyone interested?

Please note: the cvx files are the airport backgrounds. They are necessary to block out (exclude) the houses, trees, etc. that would normally be where the new airport is.

To uninstall, simpy delete the files.

For your flying pleasure, I've included a map of Ireland showing the location of the airports, VOR's and NDB's. And there is a list of the airports with co-ordinates, runways, ILS frequencies, etc. Enjoy.

If you want to really enhance your Irish and European scenery, I highly recommend "ULTIMATE TERRAIN EUROPE - FSX", which will give your world accurate roads.

I also recommend FSX-GA Traffic, which will allow you to add small plane traffic to your new airports.

If you find any faults or want to make suggestions, please contact me. I would also love to receive aerial photos of Belmullet, Letterkenny or Spanish Point, so I can lay them out accurately. 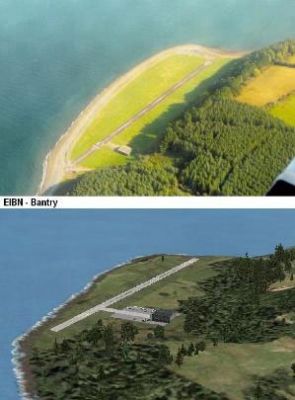 The archive irltex21.zip has 48 files and directories contained within it.