Scenery 1MA5 Southborough, Massachusetts (MA). Private runway at residence of John Garabedian. Located at top of hill between the Mass. Turnpike and Route 9. A short 1500 foot runway in a tight location in the woods. Designed for use with FSX default scenery, so no additional object libraries nee...

Scenery 1MA5 Southborough, Massachusetts (MA). Private runway at residence of John Garabedian. Located at top of hill between the Mass. Turnpike and Route 9. A short 1500 foot runway in a tight location in the woods. Designed for use with FSX default scenery, so no additional object libraries needed. Also adds some helpful nearby VFR landmarks and secondary roads. By JPS. 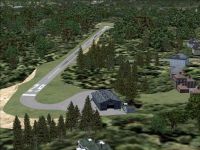 Make sure FSX is not running.

In FSX's airport selection window this airport will still be listed as "Unknown Field" (1MA5). In flight, on the GPS and map, the description will say "Garabedian Private Use" (1MA5).

This is an improved version of the stock "Unknown Field" airport in Southborough, Massachusetts, USA. I added taxiway, aprons, missing secondary roads and nearby key buildings to more closely match real life. Also added some static vehicles, airport objects, etc., to give the area some signs of life. Added some key VFR landmarks such as Cumberland Farms, many of the buildings in the surrounding industrial parks, the tanker rail yard and warehouses to the West, various things to the North and South which can aid in finding your way around in low and slow VFR.

I turned off collision detection for the hangar in case you want to practice pulling her into the hangar after landing. Sorry the hangar doesn't have the correct number of doors or look as nice as a the real thing; it's the closest I can find in the stock FSX objects.

I run stock FSX +Acceleration without any replacement meshes or scenery addon products. All objects are stock FSX so no additional object libraries are needed. However, this also prevents us from being totally accurate regarding the appearance of buildings because we can only pick from what's included in FSX.

Can you use this airport if you no longer use the stock FSX scenery?
You can install it, as above, and it will "function"; I can't imagine it causing anyone's FSX to crash considering it is made with all native FSX objects. However, if you are using a product like Ultimate Terrain, or similar, which adds secondary roads, changes land class, or adds landmark buildings, you might see some local duplication with what I have added to this 1MA5 scenery. Whether or not it will appear to be visually annoying to you I cannot predict, as I have no such products to compare to. Depending on which replacement scenery product(s) you use, your mileage will certainly vary compared with other people's experience. You can always delete the 3 files I listed above and all will become right with your world once again.

Who is John Garabedian and why does he have his own airport?
John Garabedian has been a celebrity in New England radio and television for decades. Not just a famous on-air personality, but also a key business player who started up a number of local radio stations and a television channel, the legendary "V66", which was a music video channel that competed directly with the newly born MTV in New York City. John Garabedian and his V66 station were responsible for giving then unheard of artists like Aimee Mann, 'Til Tuesday, Gary Cherone, and A-Ha their first TV appearances.

Local legend has it that John used to own the entire top of the hill upon which his private runway 1MA5 and home rests. A prime piece of real estate. The plan was to build his own broadcasting company and transmitter(s) atop this hill, but somehow his plan was blocked and the powers-that-be in the town refused to issue permits for the project to proceed. Over the past 20 years many rather expensive homes have been built up there, so, hopefully, John has recouped his original purchase of the land.

John actually has three homes across New England, and all 3 have private airports. All 3 homes also have radio studios where the nationally syndicated radio show "Open House Party" is broadcast from, and the satellite dish antennas you see near the runway in this reproduction of 1MA5 are evidence of the equipment involved. He also collects and restores classic airplanes, but judging from the small size of the hangar at 1MA5, I'm guessing those planes are kept at another location.

All work done with ScruffyDuck's Airport Design Editor FSX Edition (ADEX) 1.47.07 and Flight1's Instant Scenery 2. My updates are based on Google Earth and ground observations. 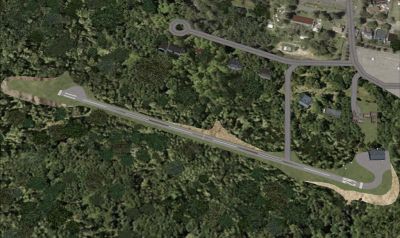 The archive fsx_1ma5_10.zip has 11 files and directories contained within it.

Hi. Trying to install 1MA5 on to P3D V4 I'm putting the 3 BLG files into Scenery>Southborough, MA>scenery. In the Scenery Areas on p3d.I add this area to the list and it becomes priority 1. But when I run P3D and select 1MA5 airport I still get the default 'Unkown 1MA5" Can you tell me what I'm doing wrong. I have just moved from FSX to P3D so I'm pretty new to P3D.