Scenery Canal du Midi of River l'Herault, town of Toulouse, France. This canal was built by Pierre Paul Riquet under Louis XIV (1666). It is now a World Heritage Site by UNESCO. The Canal du Midi is located in the south of France and straddles the departments of Herault, Aude and Haute Garonne. By Clauze Norbert.

This canal was built by Pierre Paul Riquet is filed under Louis XIV (1666) World Heritage Site by UNESCO. The Canal du Midi is located in the south of France straddles the departments of Herault, Aude and Haute Garonne. He is not represented in FSX.

This scene was designed for FSX, it has not been tested with FS9.

In addition to the route of the canal, the land classes have been changed along its course. Towns / villages planted instead of agricultural areas by default. They were changed so that one noticing more separately the following cities:
- Homps, Argens Minervois, Roubia, trebes, Marseillette, Puicheric, La Retorde, Olonzac, Argeliers, Cers / Port Soleil, The Batiste Anjou and Vias.

Has been placed:
- The Lake Jouarres.
- Some alterations were made in Beziers, Carcassonne, Castelnaudary and Toulouse (to the old airfield).
- It was added some roads and ponds found along its route.

- 1) 1 folder (Canal du midi (Avec Occitania)) for users of the addon in its version 6 Occitania = Canal du midi.BGL and LC_CanalMidi.bgl and optional the file Canal_objets.bgl

- The optional file Canal_objets.bgl place by place trees along the canal, some olive groves, and boats in the water stations. You can remove it if you wish.

- Place the Canal du Midi folder (with Occitania) or (no Occitania) depending on your installation folder:
Microsoft Flight Simulator X / Addon scenery /
- Declare the scenery in your addon-library of scenery.

Thanks to the authors for the free software. 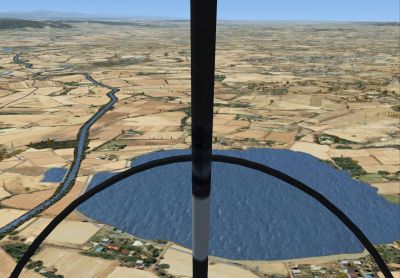 The archive canal_du_midi.zip has 17 files and directories contained within it.