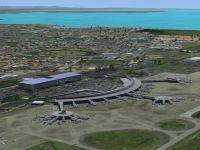 Most traffic operates on the longer runway although smaller aircraft may use 14/32.

There are four main apron areas. Northernmost is the General Aviation apron which includes the RFDS hangar.

Next is the Domestic Apron which handles domestic traffic. The Domestic terminal has three pods. The northernmost is used by QANTAS, Jetstar and Qantaslink. The middle pod (which was only recently renovated) handles common traffic from the smaller local airlines. The southern pod is used by Virgin.

Southern most is the logistics apron which handles freight. You can still make out part of the old runway and the DHL building used to be the old terminal.

East of the main runway are the General Aviation Maintenance areas, weather station, fire station, and Qantas maintenance hangars (including the new A380 hangar).

Step 2: Start FSX and manually add "Ants Aussie Airports Brisbane YBBN" to your scenery library ensuring it is above any FTX or aussiex entries.

Windows 7 and Vista users may have difficulty adding entries to their scenery library. Refer to this forum post for a detailed explanation on how to add scenery to your scenery library:

These installers will add the following files:

The installers make no changes to any default files.

The main purpose of this airport is raw, nut cracking speed. There is a very nice payware YBBN available however, I know that if I installed the payware YBBN I'd be lucky to get framerates in the double digits. This version uses a fraction of the memory of the payware YBBN and is only about 10% slower than the default FSX YBBN. I can fly this freeware YBBN with the LevelD 767 and still get acceptable framerates on my 3.14Ghz Core 2 Duo.

Almost all models have been custom made with the objective of achieving the maximum framerates possible. The only library objects used are the VOR and ILS models.

PAPI LIGHTS: Airservices Australia documentation says that YBBN still has old T-VASI lights although there is photographic evidence and a NOTAM that says on 28 Mar 2011 YBBN switched over to PAPI lights (PAPI is 4 in a row, 2 red and 2 white indicates on the glide slope). For this reason I have used the PAPI lighting system on both runways.

GROUND TEXTURES: This airport has been built with framerates as the primary concern. The ground textures are 1m per pixel photoreal, 30cm per pixel textures are used on the General Aviation, Domestic, International and Logistics aprons. An AFCAD file has been used to draw the taxiway lines on those areas not within the 30cm per pixel areas. The runways have been made using FS9 ground polys (thanks to Arno's Model Converter X which does a great job of making ground polys). I have these methods of airport construction because they provide a good representation of the airport taxiways, aprons and runways without dragging down framerates.

DISTANCES ARE IN METRES: Entrances to the runways will display the distance to run in metres (multiply by 3.82 to get feet). eg At Taxiway A4 there is 1279 metres to run on runway 01 and 2311 on runway 19.

PEOPLE: The ground crews that work at the airport are all clones (they are part of the clone army I am creating to overthrow the Empire).

Terrain Mesh Resolution 2m or better (so the drains appear)
Ground Scenery Shadows OFF (shadows are in the PR textures)
Texture Resolution: 30 cm or better (So the PR textures appear at their optimum resolution)
Airport Vehicle Traffic OFF (so you don't get silly FSX airport vehicles at every parking spot)

I have included in this download my own detail1.bmp file which is 1024x1024 pixels in size. This file is based on a tarmac road texture and works quite well on the photoreal aprons and taxiways as used in this scenery white still looking rather good on grass textures. You can copy this file into your FSX/Scenery/World/Texture folder if you like (rename the original detail1.bmp first to avoid overwriting it).

One thing to note about using a hi res detail1.bmp is that your framerates will be affected. Every piece of ground has the detail1.bmp applied and having to draw a 1024x1024 texture hundreds of times takes more processing power than drawing a 256x256 texture the same number of times.

This airport has been according to the authors needs and tastes and is presented as freeware and no support (and I mean none) is offered.

Thanks to Arno Gerretsen for ModelConverterX and Library Creator.
Thanks to Luis Sa for SBuilderX.
Thanks to all at Aussiex.

This scenery was created by Anthony Lynch with contributions by Mark Griggs.

The archive antsbrisbanev101.zip has 6 files and directories contained within it.

I have A disk for Ants Airfields But has the disk has completed loading I go to Darwin Airport and it still the same Airport as on simulator FSx Ref Scenery Libiary On FS9 and windows XP, , I could go tto scenery files But on windows 7 the flight sim FSX is not evev listed under all programs.therefore as I am not up to scrach on this type of computor installation I will have no hope of ictalling this item Please advise to my email address parkforman@bigpond.com Kindest regards Bob