RAF Coltishall, Norfolk, UK. RAF Coltishall as it was before closure. Produced for FSX with Acceleration. Versions are included for both VFR and default scenery. It covers the whole site including the accomodation and magazine areas. Contains specific model libraries but also requires the down...

RAF Coltishall, Norfolk, UK. RAF Coltishall as it was before closure. Produced for FSX with Acceleration. Versions are included for both VFR and default scenery. It covers the whole site including the accomodation and magazine areas. Contains specific model libraries but also requires the download of third party libraries. By Mike Hudson. 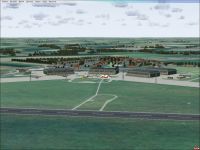 This is a representation of RAF Coltishall in Norfolk as it was before closure. It was produced simply because the default airport looks terrible when used with VFR Real Scenery, and Coltishall is not represented in the UK2000 scenery. I have made much use of third party libraries, particularly those from Ted Andrews, without which this would not have been possible. I have also constructed a small number of specific buildings. The scenery is primarily made for use in FSX with Acceleration, and has not been tested in any other version of Flight Simulator. Two versions are provided, one for use with VFR Real Scenery, and one for use with the default scenery. It has not been tested with Horizon VFR scenery, but providing the mesh/mapping is identical or close to VFR Real Scenery there should not be a problem as I see it. Note this is not guaranteed as I do not have Horizon scenery. There are a large number of models that I have constructed myself, not all used in this scenery. These are provided in library form so that others may use them if they wish. The download of free third party libraries is also required. See the installation instructions. Please read the installation instructions carefully.

The scenery covers the whole of the airfield site including both the accomodation and magazine areas. I have not been to RAF Coltishall so have had to make use of information and photographs freely available on the net. It does not claim to be super acurate, but rather to give an overall impression within the possibilities allowed by the third party libraries and what I was prepared to produce myself.

In particular the Control Tower, Fire station group of buildings is not accurate, and the church at the north west border is based on the one at RAF Halton and not that at Coltishall. I am aware that one of the hangars has a modified roof which I have not tried to depict, and by no means all of the buildings are included. The airfield altitude has been kept at 66ft, which is the default altitude, and probably some 9ft higher than the centre of the runway. This was because the default cvx file, despite the use of flattens and an _ALT file, showed if I reduced the altitude. The whole of the airfield is at this altitude, and I have used sloping polygons to blend it into the vfr mesh. I have provided a small number of static aircraft. These are two C130 Hercules in front of the hangar, and five SEPECAT Jaguars on the eastern dispersal sites. I have not attempted to provide AI aircraft or flight files. The scenery is modular in construction which allows you to delete or incorporate areas as you wish. Please see the separate note on options in the installation document. 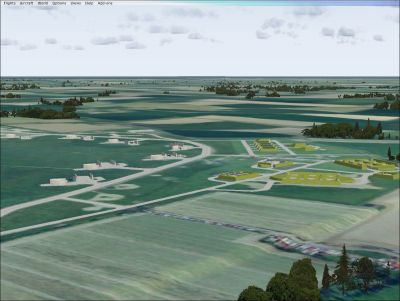 The archive raf_coltishall.zip has 193 files and directories contained within it.

Downloaded RAF-Coltishall.zip @ 12.00 20/15/18. Had about 7 drop-outs (file interrupted). A bit of a pain as I purchase a fair bit from your site. Still, I suppose that's the penalty you pay for not going premium.