The Amiot 143 went into service in 1933. It served up to WW2 even though totally obsolete. It had unusual looks and the copilot sat underneath the pilot in the gondola. This is a native FSX Acceleration project. It has the usual animations, reflective glass and .dds textures. The VC has animated flight controls. There is a minimal 2D panel. The download includes a Gnome Rhone sound file courtesy of "Lawdog". By Paul Clawson.

Screenshot of Amiot 143 in flight.

The French developed several large bulky strange looking bombers in the late 20's and early 30's. One of the most interesting was the Amiot 143. It had a very slender fuselage and a thick wing. I believe there was room in the wing to service the engines during flight. The copilot sat almost directly underneath the pilot in a long gondola. The photo's I have show the copilot had flight controls but no instrument panel and I saw no sign of engine controls in the gondola. It's flight crews liked it because it was sturdy and reliable. However, it was totally obsolete compared to its advisarys at the start of WW2. This is a native FSX Acceleration project. It has the usual animations, reflective glass and .dds textures. The VC is loosely based on a photo and has animated flight controls. There is a minimal 2D panel. I added a camera view in the gondola just behind the copilots seat to show the underslung control yoke. This view can be adjusted to your own liking. The aircraft colors were taken from the French swatches at the simmerspaintshop web site. The sound file is courtesy of "Lawdog" and is for twin Gnome Rhone engines. 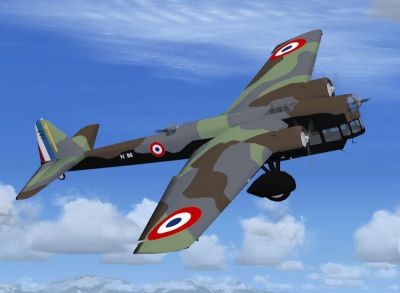 Screenshot of Amiot 143 in flight.

The archive am143-1.zip has 68 files and directories contained within it.