RDAF Douglas DC-3 texture. A repaint of the default DC-3 / C-47 as the Royal Danish Air Force K-684 in a grey/green camouflage paint scheme. Based on the repaint kit by Mark Beaumont. Aircraft photo by Erik Frikke. Painted by Kim Dahl.

RDAF Douglas DC-3 texture. A repaint of the default DC-3 / C-47 as the Royal Danish Air Force K-684 in a grey/green camouflage paint scheme. Based on the repaint kit by Mark Beaumont. Aircraft photo by Erik Frikke. Painted by Kim Dahl.

About the real plane:

The Douglas C-47A Dakota depicted in this package, construction number 19054, ex USAAF serial number 42-100591, is a true survivor of D-Day. It dropped pathfinders of the 101st Airborne on June 5th 1944, and pulled invasion gliders on June 6th. Later it served at Cherbourg, Arnhem and Bastogne, and in the Berlin Airlift (June '48 - September '49). It went on to the Royal Norwegian Air Force, and finally the Royal Danish Air Force registered as 68-684 or K-684 from August 8th 1956 till July 30th 1982. Now it can be seen as N3239T "Tico Belle" at the Valiant Air Command Museum in Titusville, Florida. Unfortunately it had a serious landing accident on July 9th 2001 at Titusville Airport, returning from an air show, and the plane has been grounded since that day. But the staff at the VAC are determined to get her back into the air. You can read about the Tico Belle and the rest of the VAC collection at www.vacwarbirds.org, and I am sure they won't mind recieving donations to their great restoration project :-)

About the flightsim model:

Since this is a repaint of a default Microsoft plane there are a few details that are not accurate. The original plane has an astrodome for navigation purposes, and the cargo door is missing on the model (but that's missing on the default "cargo" version too!). The worst bit though is the mirrorring of the textures which causes the text to be mirrored on the right side of the tail.

This repaint was made with the FS2004 repaint kit by Mark Beaumont + a lot of patience + a lot of hand painting in Microsoft Photodraw + photo material from various sources. The K-684 repaint is an update of my original FS2004 version from May 2004. It is released as freeware and may not be changed in any way without my permission.

Just put the folder texture.K-684 into the folder of your default DC-3 and add the following lines to the aircraft.cfg, replacing the X in [fltsim.X] with the next vacant numbers in your collection:

description="K-684 of the Royal Danish Air Force in a grey/green paint scheme anno 1969. This plane served with the RDAF from 1956 till 1982, and can now be seen as N3239T "Tico Belle" at the Valliant Air Command Museum in Titusville, Florida. Repaint of the default DC-3 by Kim Dahl, February 2007."

That should be just about it. Start your Flight Simulator X and find the K-684 in the Douglas section.

Have a nice flight! 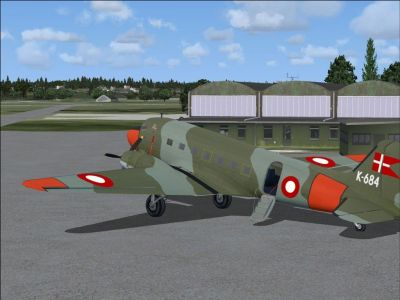 Screenshot of RDAF Douglas DC-3 on the ground.

The archive k-684fsx.zip has 17 files and directories contained within it.