Burma Banshees Curtiss P-40 "WaHoo". A repaint of Robert Hawk's P-40B Warhawk modified for Flight Simulator X . This aircraft is painted in the 80th Fighter Group scheme which was the first fighter group to be stationed in Burma since the famous AVG Flying Tigers in 1942. The 80th fighter group was unmistakably a vital element in the victory in Burma The aircraft of the 80th were easily recognizable for their nose art. This package includes pictures of the actual aircraft and squadron history. Textures and updates by Mark Rooks of RSDG Aircraft. 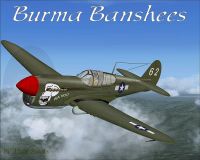 2.Copy the " Burma Banchees " folder and paste it in the main aircraft folder.

The archive banshees.zip has 9 files and directories contained within it.