Airfix Regia Aeronautica livery for the Savoia Marchetti SM-79 by Manuele Villa. This repaint is based on the Airfix plastic model and the artwork of Roy Cross (probably Airfix's most famous box-top illustrator) for this aircraft. Texture by Enrique Medal, using the paint kit by Manuele Villa.

Installation: Copy the folder 'texture.AIRFIX' to the 'Savoia Marchetti SM-79 MVG' folder in your FS2004/FSX aircraft directory. Then copy and paste the text below into the 'aircraft.cfg' file of the SM-79, being sure to replace the '[fltsim.XX]' with the next number from the last aircraft listed.

You'll find the aircraft in the 'SM.79 Sparviero/Bomber' section.

Credits: Manuelle Villa: aircraft, and for providing the paint-kit. 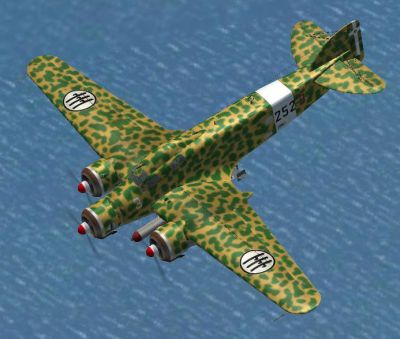 Top down view of Airfix Savoia Marchetti SM-79 in flight.

The archive savoiamarchetti79_txtrairfix.zip has 15 files and directories contained within it.