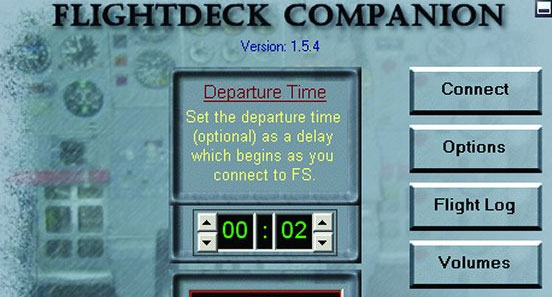 Aerosoft Online recently released they FDC Live Cockpit. Flight Deck Companion is a program that lets you add 'sounds' to your cockpit environment. Not 'just any sounds', though, but real-life call-outs by captain and co-pilot, adjustable, depending on aircraft type even. And also cabin announcements in many languages and accents.

FDC Live Cockpit is an exciting add-on that improves the virtual world of every airline. It is fully compatible with Microsoft Flight Simulator X and the previous version FS 2004. You can now overhear the dialogues of real pilots, boarding sounds and complex ambiences.

This program automatically detects and activates the flight phases depending on preset rules. Both manual and automatic flight logging is available in this add-on. This program also displays important information like take off data, error messages, cruise data, and landing data. More than ten different voice sets are included with this add-on and you have the option to add your own customized voice variations.

The performance editor can be used to add aircrafts and presets can be used for a quick flight. A 2.8 GHz processor, 2 GB memory, and a Soundblaster or DirectX 9 graphic card is required to run this add-on. Flight Deck Companion Live Cockpit is a great program and perfect for both amateurs and experienced users.

Is FDC Live cockpit compatible with MS FS2020 or are the functionalities of FDC already integrated into the new FS 2020?