Now available from Icarus for FS2002 and CFS2 is their version of the Vickers Valentia, a twin engine biplane night bomber much used in the early stages of WWII in North Africa and the eastern Mediterrania. For full details, click on Read More. 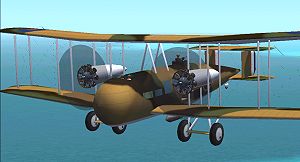 The Valentia was much used as a Night Bomber in the early stages of the War in North Africa and Eastern Mediterranian by No's 70 and 216 Sqns, and was renowned for its slow wallowing flight, which was an advantage in some respects when being attacked by the much faster opposing modern Aircraft, as its adversary would often misjudge and overshoot!

Now on sale at Icarus: